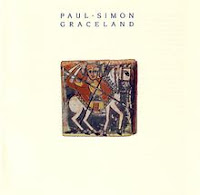 During the 1960’s, Paul Simon partnered with Art Garfunkel for five albums. Afterwards, he went solo for the 70’s and 80’s In 1986, he released Graceland, his seventh studio album, but this time he had a little bit of help - some very talented South African musicians including the vocal group Ladysmith Black Mambazo.

It went to number 46 in Japan, number 15 in Spain, number 13 in Norway and Sweden, number 4 in Italy, number 3 on the US Billboard Album chart, and number 1 in Australia, Canada, France, Switzerland and the UK.


“The Boy in the Bubble” is the first track on side one. It has a touch of Zydeco to it (which I like) with the accordion. I like the chorus by the South Africans too. It lets the listener know right up front that this is going to be different kind of album from Simon - one with a world-music sound to it. As a single, it charted at number 86 on the US Billboard Hot 100, number 46 in Australia, number 33 in New Zealand, number 28 in Belgium, number 26 in the UK, number 16 in the Netherlands, and number 15 on the US Billboard Mainstream Rock chart.

“Graceland” was the second single from the album, but it barely made a dent on any of the charts (only number 81 in the US Billboard Hot 100 and number 98 in the UK). Ironically, the song won the 1987 Grammy for Record of the Year. The lyrics of the song focus on Simon’s thoughts of his failed marriage to Carrie Fisher. The guitar work on this one is fun to listen to.

“I Know What I Know” is next. It is a little bit different of a rhythm to it with a number of interesting elements (including the back-up singers).

“Gumboots” features the return of the accordion. Simon masterfully rolls the lyrics to the up-tempo beat of this toe-tapper.

“Diamonds on the Soles of Her Shoes” closes the first side. The lyrics tell the story of a couple from the two different ends of the economic spectrum. As a single, it peaked at number 85 in the Netherlands, number 77 in the UK, number 69 in Australia, number 28 in Belgium, and number 2 on Canada's Adult Contemporary chart.

Side two starts with “You Can Call Me Al”, the first single released from the album. It did not do very well in 1986 (only peaking at 44 on the US Billboard Hot 100) so the studio released it again in 1987 (where it reached number 23). It also reached number 11 in Canada, number 9 in Finland, number 5 in the Netherlands, number 4 in the UK, and number 2 in Australia, Belgium, Ireland, New Zealand and South Africa. The lyrics of the song present a man experiencing a midlife crisis. The video for it was rather popular on MTV and it featured Chevy Chase along with Simon, mugging for the camera. Whenever this one comes on, I find myself singing along to it before I know it (the song is very catchy).

“Under African Skies” is a beautiful song with a wonderful melody.

I enjoy the African vocals of “Homeless”; even though I can’t understand the words that are not in English the a cappella harmonies are amazing.

“Crazy Love, Vol. II” follows. Another pleasant sounding song, particularly with how the guitars and drums roll along like a steady wind across a field of tall grass with the saxophone flittering about like a butterfly.

“That Was Your Mother” also has that Zydeco sound (and a Cajun setting is a key to the lyrics). I really like this one a lot.

“All Around the World Or the Myth of Fingerprints” closes out the record with a rocking drum beat. The song takes on a world-view both in the accounts in the lyrics and the fusion of the various music styles. It is a composition that works very well.

Though this album came out in the mid-80’s, I really didn’t get much exposure to it outside of the singles until the early 90’s. Right after we got married, my wife bought me my first CD player - a five-disk changer for the stereo. This album was one bought in that first year or so; my wife was a fan of the record and picked up the CD. As I get older, I appreciate the many elements of these songs a lot more than I would have in my mid-twenties when Graceland first came out. My life-experience helps me get a lot more out of them too.
Posted by Martin Maenza at 5:23 AM

I love this album. The poetry of it is amazing, from "the stacatto signles of constant information/a loose affiliation of millionaire and billionaires" to "the Mississippi delta was shining like a National guitar" to "Fat Charlie the Archangel sloped into the room". The stories are rich and believeable and the music holds up well.