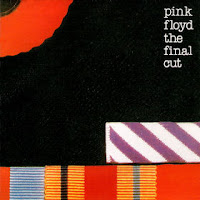 Today (March 21st) marks the thirtieth anniversary of the UK release of The Final Cut, the twelfth studio album from English progressive-rockers Pink Floyd. The US release of the album would come within two weeks on April 2nd of 1983. The record charted very well - number 6 on the US Billboard Hot 200, number 3 in Australia and New Zealand, and number 1 in France, Norway, Sweden, Switzerland and the UK.


This is very much a concept album with heavy political overtones in response to the British involvement in the Falklands War. All ten tracks were composed by Roger Waters who sung lead on all of them but one and dedicated the record to his father who died during World War II. He also designed the album's front cover. As such, many consider it a Waters solo project rather than a full-fledged Pink Floyd album. Not surprising, it also was the final album for the group on which he performed.

Side one begins with the very somber "The Post War Dream", the legacy that those who fought and died in World War II left to future generations. Waters felt those dreams were betrayed by jobs moving out of the country to Japan.

"Your Possible Pasts" was a track originally rejected from The Wall, the band's 1979 acclaimed album and film. The subtle use of audio effects, from echoing to the voices of children at play, adds a whole other dimension to this composition.

"One of the Few", also rejected from The Wall, tells of a war hero who has returned home to civilian life and has a difficult time adjusting.

"The Hero's Return" continues the same theme with the war survivor being tormented by the loss of one of his fellow airmen. It has a very majestic feel to it musically.

"The Gunners Dream" picks things up musically as it expresses those hopes of a post-war world free of tyranny and terrorism. I like the piano here by Michael Kamen and the emotional saxophone solo by Raphael Ravenscroft.

"Paranoid Eyes" is a detailed description of the depressed soldier falling into the grips of alcoholism.

Side two opens with the exclamation "Get Your Filthy Hands Off My Desert", a short commentary on war and invasions. Interesting how it is set to a bit of a classic minuet waltz.

"The Fletcher Memorial Home", named for Water's father Eric Fletcher Waters, is a twisted tale of gathering famed leaders together and killing them publicly as the world watches on.

The title track "The Final Cut" has a very intimate focus as it discusses feelings of isolation, lack of sexual desire, and thoughts of suicide.

On "Not Now John", Waters shared vocal duties with David Gilmour. The lyrics speak to public ignorance of political and economic issues at hand. An edited version of the song was released as a single which peaked at number 30 on the UK charts. I really like Nick Mason’s march-like percussion and Gilmour’s searing guitar solo on this one.

"Two Suns In the Sunset" ends things as they started - on a solemn note. This one tells of a nuclear holocaust brought on by war that wipes out all of humanity.

I am pretty certain I had not heard much of The Final Cut back in the 80’s when I was occasionally listening to album-oriented rock channels. I had not gotten into Pink Floyd as much as my older brother or other people from school did. And, when I was reading over information on this album when researching this blog post, I honestly did not think I would enjoy listening to it very much.

I am happy to say I was wrong.

The themes around this concept album are very tight and executed with musical precision. The imagery of the lyrics is vivid and engaging. I can certainly see why this one elicits such strong emotion of listeners on both sides of the fence (folks either love it or hate it).
Posted by Martin Maenza at 4:30 AM

This album is even more tumultuous in its inception that The Wall, which is almost impossible to believe.

You hit the nail on the head when you mention it as a type of Waters solo project. The album is technically credited as "by Roger Waters as Performed by Pink Floyd". The group had shattered and were fulfilling their contractual obligations. Most of Gilmour's work happened in studio specifically when Waters wasn't there. Mason and Waters were totally on the outs as well.

Most of the album was built of pieces that didn't make it into The Wall (which was originally planned to be a 3 platter set but the record company balked at the idea). In the re-issue that was released a couple years back, the song "When the Tigers Broke Free" was included as well. That song appears in the film version of The Wall, but not on the album. Its inclusion was, in my opinion, the correction of a stress induced oversight.

Waters got stuck in this vein for many years. In 1992 (or possibly '93) he released the album "Amused to Death" that was thematically identical. It was not well received critically. Classic Rock Magazine did a very interesting long form interview with Waters a couple years ago and addressed how he has been trying to work through his breakdown. He and Gilmour have even started talking again and did come to some agreements on Pink Floyd reissues and best-of compilations.