Martin Briley - One Night With a Stranger 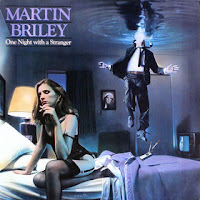 This month marks the thirtieth anniversary of the release of One Night With a Stranger, the second studio album from English singer-songwriter Martin Briley. Prior to going solo, Briley was part of Mandrake Paddle Steamer and of Greenslade. He also worked as a session musician for Cliff Richard, Olivia Newton-John, Meat Loaf, Donna Summer, Tom Jones, Albert Hammond and more.


The album features Briley on lead vocals, guitars, piano and Hammond organ. Joining him are Jamie Herndon on guitar and synthesizer, Pat Mastelotto on drums and percussion, George Meyer on backing vocals, and Robin Sylvester on bass.

Side one starts with the hit single “The Salt in My Tears”. Released as the second single, the rocker peaked at number 36 on the US Billboard Hot 100, his only top 40 hit to date. This one reminds me of the summer of 1983, that time when I was getting ready to go from high school in a small town to college in the big city.

Like the previous track, “Just a Mile Away” deals with a relationship that has come apart. But where the first one dealt with a guy who won’t give the woman how broke his heart the satisfaction, here the guy is still a bit obsessed with his former who lives very nearby.

“Put Your Hands on the Screen”, a song about the proliferation of televangelism that was cropping up on American television in the early 80‘s, opens with an intriguing Mastelotto drum intro.

The tempo downshifts a bit for another complex relationship dynamic with “Maybe I’ve Waited Too Long”.

“She’s So Flexible” bounces along at a brisk pace. The backing keyboards on the verses remind me a bit of Don Henley’s “Johnny Can’t Read” from the year prior.

Side two opens with “A Rainy Day in New York City”. I like the keyboards through out this one too; they take on the character of the rain storm in this narrative of love found and lost.

“I Wonder What She Thinks of Me” tells one of those universal situations - locking eyes with a passing stranger and then not being able to get them off your mind. I remember that from my college days, either walking about campus or hanging out at the clubs on weekends.

“Dumb Love” was the B-side to the second single. The synths on this one have that early 80’s new wave sound to them.

The album closes with the title track. “One Night With a Stranger” was also released as the lead single.

One Night With a Stranger was a decent rocking album and one of those forgotten pleasures of the early 80’s that the Internet has helped me to experience (thanks, Spotify).
Posted by Martin Maenza at 4:30 AM

I've got this one on vinyl. Can't say I think much of Briley as a solo artist (he is a good studio guy and writer) but I would rank the album cover as one of my top ten favorites.

Cory, as always, thanks for your comments. They are always appreciated. And I do agree - the cover is very cool indeed.