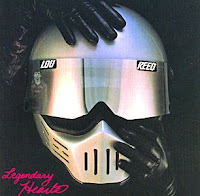 Today we celebrate the thirtieth anniversary of Legendary Hearts, the twelfth solo studio album by Lou Reed. This March of 1983 release peaked at number 159 on the US Billboard Hot 200. It features Reed on guitar and vocals, Fred Maher on drums, Robert Quine on guitar, and Fernando Saunders on bass.


Before we get to the music, how cool is that cover? That biker helmet rocks. It has a sci-fi, Stormtrooper vibe to it.

Side one begins with the title track. “Legendary Hearts” is set to a country-twang rhythm.

“Don’t Talk to Me About Work” was released as the first single. This one is full of on-the-job rage that the singer would rather leave at the front door as opposed to reliving again with his wife over dinner. I like the bass groove that is the foundation here.

The music of “Make Up My Mind” plods along with uncommitted indecision, perfectly reflecting the lyrical content. It never gets out of first gear.

That changes quickly though with the next track. “Martial Law”, a tale of a late night domestic dispute broken up by the police, was released as the second single.

“The Last Shot” has a numbing groove that clouds your mind the same way too many shots of hard liquor will do to you. The lyrics deal with someone who has decided to finally sober up and give up the bottle.

“Turn Out the Light” points how difficult it can be to face the negative consequences of your life in the light of day. The guitar grind here is very tight.

Side two opens with “Pow Wow”, a romantic overture that starts with a simple request to dance.

Reed really digs for that stinging feeling in his delivery on “Betrayed”. The way he draws out the first syllable of the title in the chorus reflects the pain.

If “Last Shot“ was about sobering up, “Bottoming Out” is about falling off the wagon, getting wasted and then driving off on a motorcycle.

Things slow down to a near crawl with “Home of the Brave”, a drunken pity party by a man who is all alone. At nearly seven minutes, it is the longest track on the record, and boy does it feel like every bit of that time.

“Rooftop Garden” closes the album with a more up-beat, mid-tempo number about a couple that is happy to just be together.

While I was certainly familiar with Lou Reed’s earlier music from the 70’s back in my high school days, the tracks from Legendary Heroes completely evaded me. They have an introspective depth that teenaged me would not have enjoyed at all. Being in my late forties now, I can see where Reed, who was in his early forties at the time he recorded this album, was pulling these kinds of experiences from. This is definitely one that having some life experience helps when listening to it.
Posted by Martin Maenza at 4:30 AM