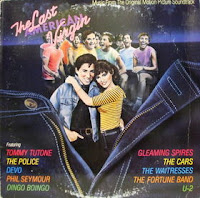 Can you believe I actually missed some albums from 1982 on the blog last year? Turns out, I did, but I am going to rectify things a bit with today’s edition of Soundtrack Sunday.

In the summer of 1982, The Last American Virgin hit screens across the globe. This remake of Eskimo Limon, a 1978 Israeli film, was set in present-day suburban Los Angeles and starred Lawrence Monoson, Joe Rubbo, Diane Franklin and Louisa Moritz. The film did not set the box office on fire at all (most likely due to having a cast of relatively unknown actors); it only made $5.8 million domestically.


I most likely saw The Last American Virgin one late on HBO or Showtime after coming home from college. This coming-of-age film about a group of guys trying to have sex falls right into that kind of late-night viewing. The movie was hardly very memorable, but the music from it certainly was.

Side one kicks off with “Teen Angel Eyes” by Tommy Tutone, a mid-tempo rocker about attempting to catch a glance by a young beauty. This is the only place the track has ever appeared.

The Police are next with “De Do Do Do, De Da Da Da” from 1980’s Zenyatta Mondatta. The opening guitar/drum hook instantly catches me every time I hear it. I also like the guitar change for the verses as well. The title and lyrics reflect the tongue-tied nature a guy can get when he is around someone who captivates him completely.

Also from 1980 comes “Whip It” which appeared on Devo’s Freedom of Choice album (click here for that review). The music video was very popular in the early days of MTV (no doubt thanks to its appearance in the film), complete with cowboys drinking beer, a cross-eyed young lady, and a woman having her clothes literally whipped off her by a man using a giant bullwhip. Ah, they just don’t make them like that any more.

Next up is Phil Seymour with “When I Find You”, another exclusive track to this record. The pensive lyrics are set to a cool, swinging rhythm.

Oingo Boingo closes out the first half with “Better Luck Next Time”. This exclusive track was their first but hardly last soundtrack contribution in the 80’s. I like the colorful first verse in this analysis of a failed relationship.

Side two begins with Gleaming Spires’ “Are You Ready for the Sex Girls?” from their album Songs of the Spires. This was the second soundtrack that I know of which featured this song from 1981 (the other is Revenge of the Nerds from 1984). The song features grinding guitar riffs that perfectly match the lewd lyrics. The sound of the baaing sheep in the background of the bridge is kind of funny and uncomfortable at the same time.

From their 1981 album Shake It Up, the Cars are next with “Since You’re Gone” (click here for that album review). The song about moving on after a break-up builds upon a simple guitar and percussion pattern.

Taken from their 1982 debut album Wasn’t Tomorrow Wonderful?, the Waitresses hit “I Know What Boys Like” follows (click here for that album review). Thanks to the film, it was re-released as a single and reached number 63 on the Billboard Hot 100. Donahue’s flirty tease goes perfectly with the catchy guitar hooks on this one.

The Fortune Band was an American rock band formed in the late 1970’s by brothers Richard and Mick Fortune. “Airwaves”, their exclusive contribution to this film, was sandwiched between their 1978 debut album and their 1985 final release.

The album closes with “I Will Follow” from U2’s 1980 debut album Boy. To me, the guitar opening by the Edge really makes it an anthem.

The film also featured snippets of a dozen or more songs including: “Shake It Up“ by the Cars, “Oh No” by the Commodores, “Love Action (I Believe In Love)” by the Human League, “Just Once“ by James Ingram, “Open Arms” by Journey, “Keep On Loving You” by REO Speedwagon and more.

The Last American Virgin soundtrack has a strong mix of music, drawing from both the tops of the music charts and adding some original content. 80’s music collectors like me would definitely want to check this one out just for those later four songs.