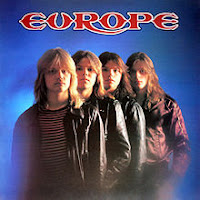 Today (March 14th) marks the thirtieth anniversary of the release of Europe, the self-titled debut album from the Swedish rock band. It charted at number 6 in their home country.

The original vinyl cover featured the line-up for the group - Joey Tempest (vocals, acoustic guitar and keyboards), John Norum (guitar and backing vocals), John Leven (bass), and Tony Reno (drums). The later CD release went with an architecture theme with angelic statues playing guitars. To be complete, I will include both with this review (though my old-school nature leans more towards the original vinyl in most cases).


Side one begins “In the Future to Come”, a quick-paced rocker about facing a cataclysmic global event.

“Farewell” is a song about moving on from a relationship.

“Seven Doors Hotels” was released as a single, making it to the top ten in Japan. The lyrics reference a fictional sorcerer named Eibon from a short story entitled “The Door to Saturn”, written by Clark Ashton Smith in 1932.

“The King Will Return” tells the tale of the aftermath of a great battle and the vow of a fallen sovereign to regain his throne once more. The opening of this mid-tempo number has a bit of a Led Zeppelin vibe to it.

The instrumental “Boyazont” closes on the first half; it features heavy, dramatic guitar riffs. This would have been a cool tune to be part of an 80’s movie score.

Side two opens with “Children of This Time”, a look at a struggling couple where the guy has been keeping secrets from the gal who adores him with all of her heart.

Things slow down a bit with the next ballad. “Words of Wisdom” tries to capture that gut-wrenching moment when a relationship has shattered. Faced with his love walking out the door, he struggles for words to convince her to say.

Despite the odd misspelling of the first word in the title, “Paradize Bay” is a scorching proposal to escape the day-to-day emotional conflicts and retreat to a private fantasy getaway in hopes of rekindling lost feelings.

“Memories” closes out the album with another song about an ended relationship. Clearly Joey Tempest, who wrote most of the songs here, was working out a lot of personal issues through his music. Given that he was still nineteen years old when the record was released, it makes sense there was a good bit of teenaged angst in his lyrics. 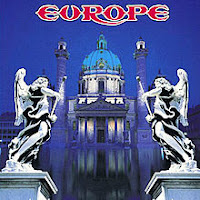 For a group of guys who were not yet in their twenties at the time, Europe really put out an impressive debut album. The musicianship is tight and the songs are pretty solid through and through. I was only slightly younger than they at the time of this debut (I having just turned eighteen myself the month before); looking back at that time and putting all this into context I definitely would have been impressed had I discovered the Europe album back in the day.
Posted by Martin Maenza at 4:30 AM