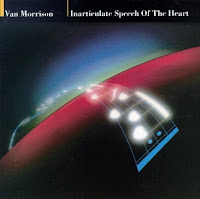 In March of 1983, Van Morrison released Inarticulate Speech of the Heart, his fourteenth studio album. It charted at number 116 on the US Billboard Hot 200, number 24 in the UK, number 22 in the Netherlands, number 17 in Norway and number 4 in New Zealand. Today we give it a listen for its 30th anniversary.


Part of the album was recorded in Dublin, Ireland, and the music shows a strong Celtic influence thanks to two Irish musicians (Arty McGlynn on acoustic guitar and Davy Spillane on bagpipes and alto flute) who played with Morrison on it.

Side one opens “Higher Than the World”, a gently rolling tune. Morrison comes across very laid back here.

The Celtic sounding “Connswater” is the first of the instrumentals here.

“River of Time” uses repetitive lyrical lines in a Blues-sort of manner, but the music goes more towards a traditional folk direction.

“Celtic Swing”, another instrumental, was released on a maxi-single. It opens slow but picks up some steam as it moves along. Morrison plays the alto saxophone on this track.

“Rave On, John Donne” was the B-side to the previously mentioned maxi-single. It is mostly a spoken word piece directed to the famed English poet and others.

Side two begins with “Inarticulate Speech of the Heart No. 1”. This instrumental showcases some lovely piano playing by Morrison.

“Irish Heartbeat” tells of a homecoming to the Emerald Isles.

“The Street Only Knew Your Name” is the first of the tracks to move into a more up-tempo rock sound for which Morrison is known.

“Cry For Home” was also released as a single; it stalled at number 98 in the UK and number 40 in New Zealand. It opens with an interesting blend of guitar with Mark Isham’s synthesizers. Morrison’s vocals are punctuated by the echoing of Pee Wee Ellis’ flute.

“Inarticulate Speech of the Heart No. 2” adds some introspective vocals to the previous instrumental tune.

The record closes with one final instrumental entitled “September Night”.

If I had stumbled across Inarticulate Speech of the Heart back in 1983, I would not have given it much more than a passing glance. The record is very mellow and soul-searching, two things I was hardly looking for as an eighteen year old. I certainly would not have appreciated it then. Thirty years later, I have to give Van Morrison some credit for doing something creative and less likely commercial. At that point, in his career, he could afford to take some risks.
Posted by Martin Maenza at 4:30 AM