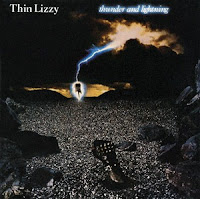 This week (March 4th) marks the thirtieth anniversary of Thunder and Lightning, the twelfth and final studio album from the Irish rock band Thin Lizzy. The album only reached number 159 on the US Billboard Hot 200, yet it topped out at number 12 in Sweden, number 10 in Norway and number 4 in the UK.


Side one opens with the title track which was also released as the second single. "Thunder and Lightning" rolls in like a rock ‘n’ roll maelstrom and does not let up for five minutes. Lynott’s vocals are rapid-fire, the guitars are blazing and Wharton lays down an awesome keyboard solo. On the charts, it peaked at number 39 in the UK and number 22 in Ireland.

"This Is the One" is up next; it includes some solid guitar solos.

"The Sun Goes Down" was released as the third single where it reached number 52 in the UK. I like the lighter guitar on this one as it gives it a more introspective feeling. Ironically, it was the band’s final studio single as well, so the sun was indeed going down on their time on the charts.

"The Holy War" closes out a strong first half of the record. The lyrics question conflicts that are fueled by religious agendas. What I like about this track, and really all of them so far, are that for heavier rock songs the vocals are actually controlled and clear. It makes for a good blend of all the elements.

Side two begins with "Cold Sweat", the first single; it charted at number 27 in the UK and number 23 in Ireland. The song outlines a tense situation, perfectly paired with a driving drumbeat from Downey and forceful guitars.

"Someday She Is Going to Hit Back" is a song about domestic violence. I find it interesting that the rest of the band counters each of Lynott’s verse lines with the song title phrase. It drives home the point that a person can only take so much abuse before they have to respond in some way.

The pleading "Baby Please Don't Go" was the B-side to the third single. In listening to this track, I could not help but think of Van Halen and how the guys from Ireland very likely inspired brothers Eddie and Alex.

The B-side to the first single was "Bad Habits", a song about those irresistible urges that tempt us. This one has a great 80’s sound to it, thanks to the guitar riff, the percussion pacing and the vocal harmonies. Not bad at all for a B-side and a near end of the album track.

The closing track is "Heart Attack", a rumbling rocker about experiencing a devastating break-up.

I was familiar with Thin Lizzy from their bigger hits in the 1970’s. However, Thunder and Lightning was not a record with which I had any exposure to prior to this review. And that was definitely my loss. I really enjoyed this record from start to finish, and have it bookmarked for downloading right away (I found I can get it on emusic for under five dollars - a great deal!).