Molly Hatchet - No Guts… No Glory 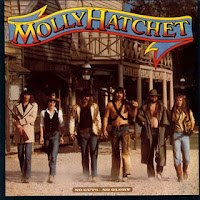 This month marks the thirtieth anniversary of the release of No Guts… No Glory, the fifth studio album from southern rockers Molly Hatchet. This record marked the return of lead vocalist Danny Joe Brown to the Florida band’s fold. The rest of the roster this time out was Barry “B.B.” Borden on drums, Riff West on bass, and Steve Holland, Dave Hlubek and Duane Roland on guitars. This one charted at number 59 on the US Billboard Hot 200


Side one roars out of the gate with the question “What Does It Matter?” I really like the power behind the guitar line here.

On the rocker “Ain’t Even Close”, the singer sets his girlfriend straight and dispels her belief that she has him ready to settle down.

“Sweet Dixie”, a celebration of southern rock, was the B-side to the album’s only single.

The epic, nearly eight minute long “Fall of the Peacemakers” rounds out the first half. The song pays tribute to the late John Lennon and calls for the end of senseless murders and violence. Some have compared it to Lynyrd Skynyrd’s “Free Bird”; I can certainly see the similarities (extended, powerful southern rock jams with a positive message).

Side two opens with another thundering question: “What’s It Gonna Take?”

“Kinda Like Love” was the only single released to support the album. Interestingly enough, it is probably the lowest key of all the songs on the record so far. I can see someone might have thought it would have a better chance at crossover appeal on various charts (rock, pop, even country). Still, a solid tune.

The party kicks back into high gear with “Under the Gun”. My heels under my desk are instantly tapping in time to the rhythm as I type this sentence.

“On the Prowl”, a down and dirty ditty about pursuing a woman, opens with a great guitar riff. Of course, we get more guitar solos as the song rolls along across four minutes.

The five minute instrumental jam “Both Sides” has a nice guitar only opening before the rest of the band joins in. I like how they went that route to close out the record.

I had a little familiarity with Molly Hatchet prior to the release of this album, mostly from the album oriented rock station playing their stuff from the late 70’s. But our senior class trip during high school in early June of 1983 changed that. We took chartered buses to Darien Lake amusement park a few hours away for an afternoon and evening of rides and fun. But the capper of the event was the fact that Molly Hatchet was playing at the amphitheater pavilion that night, and our park admission got us access to the show too. Man that was one loud but high energy concert! Definitely a good memory from high school (even if everyone did get me totally soaked on the log flume ride earlier in the day).

No Guts… No Glory still holds up very well. Something about southern rock is timeless to me. Skynyrd, ZZ Top, Molly Hatchet, and the Allman Brothers - just some good ole boys laying down some searing rock ‘n’ roll.