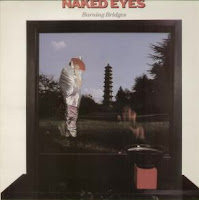 Hailing from Bath, England, singer Pete Byrne and keyboardist Rob Fisher were both in a band called Neon (along with Roland Orzabal and Curt Smith who would go on to form Tears For Fears) before starting their own group. This month marks the thirtieth anniversary of the release of Burning Bridges, the debut album from Naked Eyes. It peaked at number 32 on the US Billboard Hot 200.


The record was released with a slightly altered format in the US and Canada (different track order, different cover and simply the title Naked Eyes). For today’s review, I will go with the original UK release order.

Side one opens with the solid dance rhythms of “Voices in My Head”. As the second single from the album, it began gracing airwaves at the end of January of 1983. I like the echoing effect done of the title near the end.

“I Could Show You How” is about the feeling of paralysis that comes after a break-up, when what-ifs and might-have-beens fill your head.

“A Very Hard Act to Follow”, a continuation of the process of moving on, was the B-side to the third single. It opens with a very odd combination of synth effects before falling into a regular rhythm. It was one of two tracks left off the Naked Eyes US release.

The debut single “Always Something There to Remind Me”, which preceded the album by five months, is a cover of the Burt Bacharach and Hal David song that was recorded in the 60's by such artists as Lou Johnson, Sandie Shaw and Dionne Warwick. As the first single for Naked Eyes, it went to number 59 in the UK, number 8 in Canada and on the US Billboard Hot 100, and number 2 in New Zealand. I first heard this one on the local college radio station in early 1982 and became an instant fan. The big church bells at the start set a great tone for this song about remembrance and regret.

“Fortune and Fame”, with its cascading tones, is up next.

“Could Be” continues the record’s overall theme of love lost and loneliness. The saxophone solo adds to the somber scenario.

Side two begins with the bouncing title track “Burning Bridges”, an introspective number about living with the consequences of choices.

There is no confusing this “Emotion in Motion” with the hit song by Billy Squier; this one is pure synth bliss.

“Low Life” was the B-side to the fourth single. The horns on this song about struggling to make ends meet give it a jazzy element.

The B-side to the first single was “The Time Is Now”; it too was left off of the Naked Eyes US release.

The fourth single “When the Lights Go Out” was released in the fall of 1983; it charted at number 37 on the US Billboard Hot 100. This one tells the tale of a woman who constantly calls out her former lover’s name in her sleep.

The closing track “Promises, Promises” was released as the third single in the summer of 1983. It charted at number 95 in the UK, number 15 in New Zealand, number 11 on the US Billboard Hot 100 and number 6 in Canada. This one falls into that category of “I’m always singing along to it when I hear it”. It just registers on a deep part of my psyche, and it has a funky dance beat hook to boot. 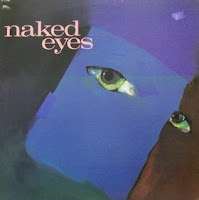 During my last year of high school and all through college, I loved the two big singles from this album. Despite that, I never owned either of them on vinyl. It wasn’t until the early 90’s, when I got my first CD player, did I pick up The Best of Naked Eyes; that collection of fifteen tracks was split across Burning Bridges and the follow-up album Fuel For the Fire at a 9-6 split. I downloaded the remaining quarter the former prior to doing this review, just to be complete.

I think as a whole, the album would have gotten a lot of play out of me during my single, youthful years - particularly in those in-between dating periods. It just has that whole angst quality that would have been welcomed during rough emotional periods. Plus, it was synth-pop - a genre which I totally was into during the early to mid-80’s.
Posted by Martin Maenza at 4:30 AM