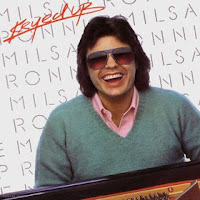 The original vinyl release included ten songs, but the later US CD release cut it back to only seven for some reason (import CDs from Japan restored it to ten). For this review, I will stick to the full vinyl content.


Side one starts with the hit single “Stranger In My House”, the first single from the album from April of 1983. It charted at number 42 in Canada, number 23 on the US Billboard Hot 100, number 8 on the US Adult Contemporary chart, number 5 on the US Country chart and number 1 on the Canadian Country chart. The lyrics tell of an unmistakable infidelity in a relationship that is coming between a man and the woman he loves.

“Show Her” was the third single from the album and was released in December of 1983. It charted at number 103 on the US Billboard Hot 200, number 17 on the US Adult Contemporary chart, number 4 on the Canadian Adult Contemporary chart, and number 1 on the both the US and Canadian Country charts. This sweepingly sentimental song is all about letting your actions speak for you when it comes to the one you love.

“Don’t Your Mem’ry Ever Sleep At Night”, with its swaying old fashioned rhythm, sums up how sometimes the thoughts of the past remain constant even after a relationship has come to an end.

The B-side to the third single was “Watch Out For the Other Guy”. This one warns that if you fail to treat your lady right that there might be someone else who will be willing to do it for you. Once more, the rhythm really grabs a hold of the listener and rocks them in its gentle flow.

“I’m Just a Redneck At Heart” is a fun-loving fish-out-of-water tale set to a swinging country groove. This one definitely stands out from the rest of the record just because it goes to a different theme than a romantic one. I would have liked to see another track or two along this vein as well, just to mix things up a bit.

Side two begins with the second single which “Don’t You Know How Much I Love You” in August of 1983. It went to number 58 on the US Billboard Hot 100, number 12 on the US Adult Contemporary chart, number 8 on the Canadian Adult Contemporary chart, and number 1 on both the US and Canadian Country charts. I vaguely remember this one from my pop radio listening days during my senior year of high school; it did not make as big of impression as the first track on the album did.

“Feelings Change” was the B-side to the second single. The music sets a melancholy mood as the heart comes to the realization that it no longer beats for the one it once did.

“Like Children I Have Known” compares the actions of a couple separating to those of immature adolescents.

“Is It Over”, another break-up song, was the B-side to the first single.

“Closing out the record is “We’re Here To Love”, a positive message of universal harmony and brotherhood.

I was not super into country music during my days of growing up except for those songs that crossed over to the pop charts. With the tracks here on Keyed Up, Ronnie Milsap definitely had a sound that could easily do that. They had that pop-country element that I certainly enjoy listening to.
Posted by Martin Maenza at 4:30 AM