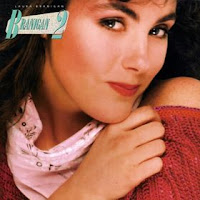 Following a year after her self-titled 1982 debut (click here for that review), American singer Laura Branigan returned to the charts with the aptly titled Branigan 2 on March 14th of 1983. The album reached number 46 in Canada, number 30 in Australia, number 29 on the US Billboard Hot 200 and number 11 in New Zealand.


Side one starts with “Solitaire”. As the first single from the album, it charted at number 12 in New Zealand, number 9 in France, number 8 in Canada, number 7 on the US Billboard Hot 100, and number 5 in Australia. The song was originally recorded by French singer Martine Clemenceau in 1981 and remained on the French charts for 22 weeks; Diane Warren rewrote the lyrics as a song about heartbreak in English for Branigan. The song features a prominent synth foundation and a strong dance beat.

“Deep in the Dark” takes the music hooks and melody of Falco’s 1981 song “Der Kommissar” and pairs it up with completely different English lyrics by Bill Bowersock. Branigan’s version paints a picture of deception and treachery in the guise of love. She does keep the “uh oh” in the chorus refrains though.

Things slow down a bit with “Close Enough”, a sweepingly dramatic romantic ballad that allows Branigan to hit some powerful notes. The song’s co-writer Robbie Buchanan plays piano on this one.

The bittersweet break-up song “Lucky” has a bit of a country-pop flavor to it, thanks to the guitar arrangement.

“Squeeze Box” was a song by the Who on their 1975 album The Who By the Numbers. Branigan’s cover keeps the original’s whimsy, but it trades Pete Townshend’s hard rocking chords for a more countrified sound.

Side two opens with the question “How Am I Supposed to Live Without You”. This Michael Bolton penned ballad was released as the second single from the album in the late summer and peaked at number 46 in Australia, number 12 on the US Billboard Hot 100, and number 1 on both the US and Canadian Adult Contemporary charts. Though Bolton later recorded it himself in 1989, I prefer Branigan’s rendition better as I think the song works better from a female’s perspective.

“I’m Not the Only One” was the B-side to the first single. The song falls into a dance tune category, adapting elements of the late 70’s disco style for a new decade.

The B-side to the second single was “Mama”, a song written and recorded by Italian singer Umberto Tozzi in the 1970’s. Again, Warren reinterpreted the lyrics in English for Branigan to record. It tells the story of a young woman who refused to listen to the advice of her mother concerning a suitor; happily she finds joy in the arms of a truly bad boy.

Things slow down once more for the beautiful ballad “Find Me”.

Back in 1983, I was very aware of the hit singles from Branigan 2 thanks to so much Top 40 radio listening and her appearances on shows like Solid Gold and such. I was definitely a fan from her debut. It was not until February of 2011 that I added the rest of the album to my digital music library.
Posted by Martin Maenza at 4:30 AM

The final track is called "Don't Show Your Love" not Don't Know Your Love ;)

Thanks for catching my typo. Corrected.