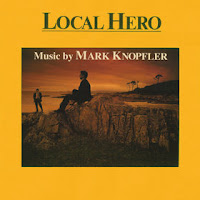 In early 1983, a Scottish comedy-drama entitled Local Hero hit the theatres. It told the story of an American oil company representative who is sent to a small Scottish village to purchase the town and its surrounding property. The film starred Peter Riegert, Burt Lancaster, Denis Lawson and Fulton Mackay.

The accompanying soundtrack album was written and produced by Dire Straits’ Mark Knopfler, which helped popularize the film with fans of the band. The record earned a BAFTA (British Academy of Film and Television Arts) nomination for Best Score for a Film.


Side one begins with “The Rocks and the Water”, a very dark and moody piece with synthesizer bleeps provided by keyboardist Alan Clark. It brings to mind a waterfront at night.

“Wild Theme”, the B-side to the album’s single, features some lovely guitar by Knopfler and piano accompaniment by Clark. It is very free and uninhibited.

“Freeway Flyer” is a raring, open-road frolic. It includes Dire Straits band members Hal Lindes on rhythm guitar, John Illsley on bass and Terry Williams on drums. I like how the sound goes in and out, much like the sound of cars passing on the road.

“Boomtown (Variation Louis’ Favourite)” is a more jazzy number, complete with Mike Brecker on saxophone, Mike Mainieri on the vibraphone, Neil Jason on bass and Steve Jordan on drums. It is definitely my favorite of the tracks so far - very smooth and relaxing.

Gerry Rafferty provides the vocals on “The Way It Always Starts”, the only non-instrumental track on the record. It has a bit of a Latin flavor to it musically.

“The Rocks and the Thunder” is a forty second synthesizer interlude to close off the first half.

Side two opens with “The Ceilidh and the Northern Lights”, a Celtic variant of the earlier “Wild Theme” arrangement. With the synthesizer, he was able to get bagpipe and crashing wave sounds.

If the goal for “The Mist Covered Mountains” was to emulate a traditional Scottish folk song, they definitely succeeded. Again, there are nice wave effects at the start.

“The Ceilidh: Louis’ Favourite / Billy’s Tune” is a lively tune that evokes the image of a quaint countryside pub with a number of local guys performing for the evening crowd.

Next is “Whistle Theme” which clocks in at under a minute. Just as the title implies, it is predominantly a tin whistled tune with a light guitar in the background.

On “Smooching”, Knopfler’s finger-picking guitar style is the main focus.

“Stargazer”, at just over a minute and a half, has a very cosmic feel to it.

There is then a reprise of “The Rocks and the Thunder” theme from side one.

“The closing track Going Home: Theme of the Local Hero” was released as a single. It has a bit more of a rock edge to it over the rest of the tracks.

I had never heard of the film Local Hero or this album until I was making up my list of 1983 records to review. Since I like the music of Dire Straits well enough, I thought I should add it. And, I am glad I did. I found it to be a very enjoyable collection of tracks, perfect for ambient background music to unwind to. I am sure the pieces would have even more meaning if I had film context to place them against.