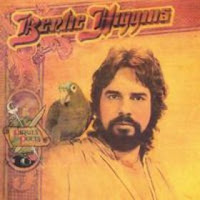 Just a little over a year after his hit album Just Another Day In Paradise (click here for that review), this month marks the thirtieth anniversary of Pirates and Poets, the second studio album from Bertie Higgins.


Side one starts with “As Time Goes By”, a song written by Herman Hupfeld in 1931. The song was made famous in the 1942 film Casablanca which in turn inspired Higgins’ biggest hit song from his previous record. So, he comes full circle with this cover here. I like how it is done to sound like on old Victrola recording.

“Pirates and Poets”, a gentle song about a lovers’ getaway, was released as the first single.

The ballad “When You Fall In Love (Like I Fell In Love With You)” is about coming to the realization of how much someone means to you.

“Leah” was a 1962 hit for Roy Orbison, so it is only fitting that he provided some vocals on Higgins’ cover of the song. Their two voices work well together, trading lines and then blending into harmonies.

“Under a Blue Moon” is a picturesque tropical tune about finding love when you least expect it.

“Tokyo Joe” brings in the element of an exotic, oriental love affair between an American visitor and a Japanese native girl. I like the instrumental bridge on this one.

Side two begins with “Beneath the Island Light”, the B-side to the first single. I like the guitar opening here; it sets the mood perfectly for this tropical number.

“Only Yesterday” is a beautiful piano ballad about those vivid memories of a love long gone.

“Marianna” is an ode to a lovely island lass, complete with tropical rhythms and riffs.

“Pleasure Pier” opens with a verse about teenaged memories and spying on the girl of his dreams. It quickly moves to modern times, with heartbreak and unemployment. But even in times of trouble, those old memories are something that cannot be taken away from you. I really like the old time rock ‘n’ roll feel to this one musically.

“Never Looking Back” tells the story of a Vietnam veteran who returns home to start a new life as a pilot for a drug runner. He ends up betrayed, serves a prison sentence, and has to start life over one more time.

The album closes out where it started, with the “As Time Goes By (Reprise)”

I am not sure why I did not pick up Pirates and Poets when it came out in 1983, seeing as I was a fan of the previous album. It might have been that I did not notice its release as none of the singles had as much of a chart crossover as the previous ones did. The small town record store I had available to me before I went off to college often only featured the big chart releases and got, if you were lucky, a single copy of other things.

Over the years, through collections, I have managed to pick up a few tracks from this one here and there. However, I found that you can purchase Pirates and Poets on CD or in MP3 format (you can get individual tracks if you like), along with more of Bertie Higgins’ music, though his website Bertie Higgins.com (click here to jump to the music page of his site).
Posted by Martin Maenza at 4:30 AM