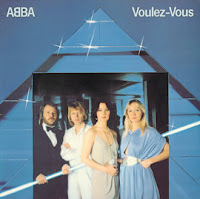 On April 23rd, 1979, the Swedish pop group ABBA released their sixth studio album entitled Voulez-Vous. This Platinum seller peaked at number 19 on the US Billboard Hot 200, number 6 in Canada and France, number 5 in Australia, number 2 in New Zealand, and number 1 in Germany, the Netherlands, Norway, Sweden and the UK.


Side one opens with "As Good As New". Don’t let the classical music strains at the start fool you; this is a straight up dance song complete with a funky bass line.

The title track "Voulez-Vous" was released as the third single in July of 1979. It stalled at number 80 on the US Billboard Hot 100, number 79 in Australia and number 43 in Canada. In Europe, however, it did very well (number 9 in France, Spain and Switzerland, number 4 in the Netherlands, number 3 in Ireland and the UK, and number 1 in Belgium). This seductive little number has a fantastic rhythm to it, coming right out of the disco era which still was hot over in Europe after it cooled here in the US. The song even had an extended dance remix that came out later that year.

"I Have a Dream" was released as the fourth single in December of 1979. It has a bit of a folk feel to it with the simple guitar accompaniment. It really allows for the group’s harmonies to shine through.

The bouncy "Angel Eyes", a song about being swept away and eventually deceived by a lover, was part of the double A-side to the third single's UK release. It charted at number 3 in Ireland and the UK.

The tempo drops down to a mid range on "The King Has Lost His Crown", the story of a playboy who encounters a woman he cannot charm.

Side two begins with "Does Your Mother Know". I always was a fan of this one, especially back in the day when it was all over the airwaves. As the second single, it went to number 27 in New Zealand, number 26 in France, number 19 on the US Billboard Hot 100, number 18 in Japan, number 17 in Mexico, number 13 in Austria, number 10 in Germany, number 8 in Canada, number 7 in Australia, number 6 in Switzerland, number 4 in the Netherlands and the UK, number 3 in Ireland, number 2 in Canada and Finland, and number 1 in Belgium. I like the pulsating synths and percussion that opens it, and then how it shifts into a classic pop/rock kind of track.

"If It Wasn't For the Nights" keeps things going with another mid-tempo dance number. Part of the hook in the refrain reminds me a bit of Candi Staton’s “Young Hearts Run Free” from 1976.

"Chiquitita", the first single, hit number 29 on the US Billboard Hot 100, number 4 in Australia and Norway, number 3 in Germany, number 2 in Sweden and the UK, and number 1 in Ireland, the Netherlands and New Zealand. This classic is beautiful, from the vocals by the ladies to the guitar and piano music that, near the end, almost sounds like a carousel.

Ripped from the headlines, "Lovers (Live a Little Longer)" gives good advice on how to prolong life a bit more.

The closing track "Kisses of Fire" was selected as the B-side to the second single. You would think after so many dance tracks that a ballad would fit here, but again the opening is deceptive.
Posted by Martin Maenza at 4:30 AM