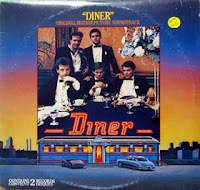 Welcome to another edition of Soundtrack Sunday. And, surprise surprise, I found another film tie-in from 1982 that I completely forgot to cover last year for its thirtieth anniversary. So, let’s make up for that.

Released on March 5th of 1982, Diner was the directing debut of screenwriter Barry Levinson. The comedy-drama, set in Baltimore in December of 1959, was the story of a group of male friends who get back together for the wedding of one of the guys. The cast featured a whole slew of young actors on the verge of career breakthrough - Steve Guttenberg, Daniel Stern, Mickey Rourke, Kevin Bacon, Tim Daly, Paul Reiser and Ellen Barkin.


The double-record soundtrack featured a who’s who of 1950’s musicians including: The Del-Vikings (“Come Go With Me”), Dion & the Belmonts (“A Teenager In Love”, “I Wonder Why”), Bobby Darin (“Beyond the Sea”, “Dream Lover“), Fats Domino (“Whole Lot of Loving”), Jerry Lee Lewis (“Whole Lotta Shakin’ Going On”), Carl Perkins (“Honey Don’t”) and Elvis Presley (“Don’t Be Cruel”).

There are also a number of artists and/or songs that I did not readily remember from listening to “oldies” radio (usually on AM) back in my childhood. These I actually had to look up on Spotify to give them a listen.

Eddie Cochran - “Somethin’ Else” - hmm, this one sounds vaguely familiar. I definitely like the hard guitars and drums.

Tommy Edwards - “It’s All In the Game” - this is a smooth mix of doo-wop and regular pop, perfect for crossing over to two audiences at once.

Percy Faith - “(Theme From the Motion Picture) A Summer Place” - this one I definitely knew, but I wanted to single it out here to mention how interesting it is when a soundtrack includes a key song from another soundtrack.

The Fleetwoods - “Mr. Blue” - I didn’t remember this one…until I got to the chorus. Then the light bulb went off.

Lowell Fulson - “Reconsider Baby” - ah, the blues. For me, the blues are best enjoyed live. As for this song, I can definitely say I don’t recall it at all.

The Heartbeats - “A Thousand Miles Away” - it turns out this one appeared in the American Graffiti soundtrack as well. Still, it is not one that I would have been able to hum a few bars to.

Clarence “Frogman” Henry - “Ain’t Got No Home” - this song I do know after all, I just was not familiar with who did it! Who can forget his crooning for a verse, and then followed by a high falsetto verse and then falsetto crooning?

Dick Haymes - “Where or When” - this lovely orchestrated ballad is one I also don’t recall at all. Haymes reminds me of a young Paul Anka or Mel Torme.

Jane Morgan - “Fascination” - finally, a female artist represented on the soundtrack - even if her vocals don’t come in until the second half. Still, no recollection of this song.

Jimmy Reed - “Take Out Some Insurance” - and, back to the blues.

Jack Scott - “Goodbye Baby” - and things close out with a slow-tempo rockabilly ditty.

I did catch an anachronistic error though. “Beyond the Sea” was not released until January of 1960 so technically it could not have been heard by the characters in a film set in late 1959 (unless some over-eager disk jockey had played it too soon).

Now I was definitely a nostalgia person during the late 70’s and early 80’s. I saw American Graffiti on HBO a couple times and was a regular viewer of both Happy Days and Laverne and Shirley each week. Now, I have to think though if I have ever seen Diner; I know I didn’t see it in the theatres so it would have to have been on cable if I did. The soundtrack definitely fits the era perfectly.
Posted by Martin Maenza at 4:30 AM