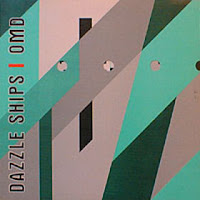 This week (March 4th) marks the thirtieth anniversary of the release of Dazzle Ships, the fourth studio album from the UK band Orchestral Manoeuvres in the Dark. Like their earlier records, this one too went Gold in their native UK and reached number 5 on that charts. It also did well in the Netherlands (number 15), Germany (number 11) and New Zealand (number 10). Here in the US, it stalled at number 162 on the Billboard Hot 200 chart.


Side one opens with "Radio Prague", a short fanfare that sounds like it could be heard outside a European palace. It is meant to serve as a setting piece for the concept album set in the Cold War Communist Block.

"Genetic Engineering", the first single, reached number 32 on the US Mainstream Rock chart, number 20 in both Germany and the UK, number 18 in Belgium, number 11 in Ireland, and number 5 in Spain. This one is a rather bouncy number, full of synth goodness in homage to groups like Kraftwerk.

"ABC Auto-Industry" opens with a rather simple, repetitive line that is built upon with more. The result is a rather entrancing, multi-layered composition that evokes a mechanical mood.

"Telegraph" was released as the second single. It charted at number 42 in the UK, number 39 in Germany, number 32 on the US Mainstream Rock chart, and number 28 in Ireland. This pop number about antiquated technology sweeps and soars with a sarcastic pride.

"This Is Helena" reminds me of some Euro-dance pop I had heard in the 90’s that mixed vocal samples with the music, so clearly OMD was inspirational to this kind of movement.

"International" opens with a foreign news story before sliding into a melancholy oompa beat. The vocals cover a broad range of emotion when addressing topics of war and death.

Side two begins with "Dazzle Ships (Parts II, III & VII)", a collection of sounds that summon to mind submarines moving deep beneath the water until an urgent alarm sounds.

"The Romance of the Telescope" opens with a synth rhythm that is reminiscent of the stamp-stamp-clap of Queen’s “We Will Rock You”. It is then joined by hushed, reverent synth chords and vocals that reflect upon how stargazing to the heavens makes us feel small and insignificant in comparison to the vastness of the cosmos.

"Silent Running" is next and, for me, it is the first misstep on the record. It fails to keep me engaged after such inspired sounds prior to it.

"Time Zones" is another experimental piece that uses automated voices announcing the time. They are layered over one another and separated by blip-beeps. Interesting to listen to but not one I would repeat too often.

"Of All the Things We've Made" closes the original vinyl with a note of resignation. It brings about feelings of the inevitability and finality of things.

The re-mastered CD version added six more tracks, including a couple of remixes of the two singles and more.

This review was my first time fully experiencing Dazzle Ships as a complete work. I most likely did hear the singles from this album on local college radio at the time, but OMD had not taken a full hold on my music palette at that point. Listening to this one with a more mature ear, I can appreciate what the band was going for on this record even if some of the tracks come across as rather abstract concepts. In the end, one certainly could never accuse them of sticking to a conventional and boring model.

- For their first album Orchestral Manoeuvres In the Dark, click here

- For their third album Architecture and Morality, click here
Posted by Martin Maenza at 4:30 AM