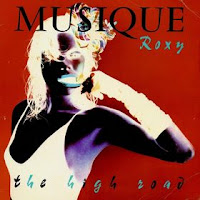 A year after releasing their final studio album Avalon (click here for that review), Roxy Music compiled a four song EP of live recordings from an August of 1982 show at the Apollo in Glasgow, Scotland. It charted at number 67 on the US Billboard Hot 200 and number 26 in the UK. Today we will look at the March of 1983 record The High Road in honor of its thirtieth anniversary.


The line up for this record included Bryan Ferry on vocals and keyboards, Phil Manzanera on guitar, Andy MacKay on saxophone and oboe, Neil Hubbard on guitar, and Andy Newmark on drums. They also got additional assists from Paul Thompson (drums), Alan Spenner (bass), Jimmy Maelen (percussion), and Guy Fletcher (keyboards). The backing vocals were provided by Tawatha Agee, Michelle Cobb and Fonzi Thorton.

Side one begins with “Can’t Let Go”, which first appeared on Ferry’s 1978 solo album The Bride Stripped Bare. The additional percussion and the guitar on this one gives it an exotic feel. I don’t recall hearing this one before but I definitely like it; it has lots of great energy.

“My Only Love” first appeared on the group’s 1980 album Flesh and Blood. This mid-tempo tune opens with a funky bass line and rich synthesized strings, and features a couple of extended guitar solos. Ferry’s vocals convey longing passion and desire.

Side two features two covers. First up is the seven and a half minute rendition of Neil Young’s “Like a Hurricane”, a song that appeared on Young’s 1977 album American Stars ‘N Bars. I like this version a lot as Roxy Music infuses a sexy soul vibe to it. I also enjoy MacKay’s saxophone solo which runs a good minute.

Next is a cover of John Lennon’s “Jealous Guy”, a song from Lennon’s 1971 album Imagine. Roxy Music began playing it in their concert sets after Lennon’s death in 1980; they released it as a single which topped the UK charts at number 1 for two weeks.

All of these songs can be seen in the live recording of the Frejus concert from France which was released on The High Road 1982 concert film. The DVD version was released in 2004.

As the group had broken up after the release of Avalon, The High Road was a nice final farewell to all of their fans.
Posted by Martin Maenza at 4:30 AM