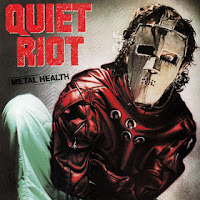 Today (March 11th) is the thirtieth anniversary of the release of Metal Health, the third studio album from Los Angeles heavy metal band Quiet Riot. This multi-Platinum 1983 record has the honor of being the first metal album to hold the number 1 spot on the US Billboard Hot 200. It also charted at number 5 in Canada and number 33 in New Zealand.

The title track kicks off side one. "Metal Health (Bang Your Head)", the first single, went to number 71 in Canada, number 45 in the UK, number 37 on the US Mainstream Rock chart and number 31 on the US Billboard Hot 100. The thrashing guitars and the pounding percussion go right to my core, unleashing something very primal. This rocker insists you turn it up to eleven!

"Don't Wanna Let You Go" has a skulking, stalker vibe to it as an overly obsessive boyfriend is not ready to give up on the woman he loves.

"Slick Back Cadillac", a high-octane ode to a classic automobile, was a song first released by the band on their 1978 album Quiet Riot II and then re-recorded for Metal Health. To promote the new release, they put out a live cut of the track (available as a bonus track on the 2001 CD re-release) as a single which peaked at number 32 on the US Mainstream Rock chart.

"Love's a Bitch" drips with an anguished attitude about complicated emotional entanglements.

Side two barrels in at a "Breathless" pace. The guitars are relentless.

The B-side to the second single was rapid-fire "Run For Cover". I bet this one was a crowd pleaser when performed live, especially with those fun instrumental solos.

"Battle Axe" is the shortest track on the album, just over a minute and a half. It is actually just a guitar solo interlude by Cavazo, but it is pretty cool.

"Let's Get Crazy" is a perfect “partying on the weekend” kind of song, a celebration of getting wild and loose.

The closing track "Thunderbird" was dedicated to former band member guitarist Randy Rhoads who had been killed in a plane accident in 1982. This gentler ballad features lovely piano playing by Sarzo.

My high school best friend John and my freshmen year college roommate Steve both had a copy of Metal Health on vinyl. As a result, I heard a lot of this one for about a year's time from mid-1983 to mid-1984. I guess it infiltrated my brain and nested there for quite a few decades. Last February, I picked up a copy of it on CD in the bargain bin at Best Buy (for under $5) and have listened to it over a half dozen times already. I think it still is a solid album.