Mental As Anything - Creatures of Leisure 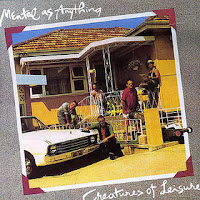 Following their fall of 1982 release If You Leave Me, Can I Come Too (click here for that review if you missed it), Mental As Anything released their fourth studio album entitled Creatures of Leisure. It went to number 37 in New Zealand and number 8 in their homeland of Australia.

To celebrate its thirtieth anniversary this month, today we will take a look at the tracks on this out-of-print International version of the record album (thanks to folks on YouTube who posted tracks for some of them).


Side one starts with “Spirit Got Lost”, the second single. It reached number 20 on the Australian charts. I like the bouncy piano beat on this quirky song about life after death.

“Float Away” is next (no comments as I had nowhere to listen to it).

The third single was “Brain Brain”; it stalled at number 82 on the Australian charts. This slower swing tempo number is about a guy coming to terms with the end of a relationship. The music video for it is full of very odd visuals.

“Bitter to Swallow” follows (again, could not find it to listen to)

“Close Again” was released as the first single in November of 1982. It reached number 55 on the Australian charts. Its rockabilly vibe is a nice throwback to the early days of rock and roll in the late 1950’s.

“Nothing’s Going Right Today” closes the side (sorry, nowhere to hear it online)

Side two opens with “Working For the Man”, the final single from late in 1983. This cover of a 1962 tune by Roy Orbison rose to number 49 in New Zealand and number 20 in Australia.

“Fiona” features a very subtle funky guitar riff in the background that I picked up on right away; it creates a spicy contrast to the country-rock sound of the rest of the song.

“Seems Alright To Me” appeared on the B-side of the final single.

The next three tracks that follow I also could not locate anywhere. The B-side to the third single was “Drinking of Her Lips”. “Red to Green” and “Let’s Not Get Sentimental” follow.

The bouncy “Business & Pleasure” first appeared on the group’s 1979 debut album Get Wet and was substituted on the US release to expose audiences to some of the group‘s earlier tunes.

Having heard just over half of the tracks on Creatures of Leisure, I can definitely say it was shaping up to be a record I would have enjoyed listening back during my final days of high school and early days of college. Mental As Anything was a part of the Australian music scene that was growing popular here in the States at the time, though they did not get nearly the exposure as some of the other artists whose names are remembered from that time. If a reissue label put out a compilation of their stuff, I definitely would be interested in picking it up.
Posted by Martin Maenza at 4:30 AM