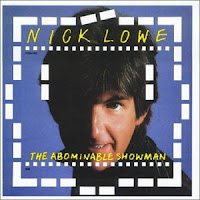 In March of 1983, Lowe released The Abominable Showman, his fourth solo studio album. Joining him on this record were Martin Belmont (guitar), Paul Carrack (keyboards and vocals), James Eller (bass) and Bobby Irwin (drums and vocals). Today we’ll take a look at the release in honor of its thirtieth anniversary.


Side one begins with “We Want Action”, a lustful song about looking to hook up with ladies, no matter their build, look or occupation.

The up-tempo “Ragin’ Eyes” shows those early days of rock influences to it; it sounds like something Buddy Holly might have done. This track was the first single released from the album.

“Cool Reaction” brings in some reggae elements to the mix.

“Time Wounds All Heels” features great wordplay right there in the title. I like the gentle sway of the music here - a very soft pop sound. Co-writers Carlene Carter and Simon Climie provide some of the vocal harmonies on this one.

The next track‘s full title is “For Every Woman Who Ever Made a Fool of a Man There’s a Woman Made a) Man of a Fool” but most of the time people just drop what is in the parenthesis for brevity sake. Besides, otherwise you are singing the whole chorus every time you mention the title.

“Tanque-Rae” was the B-side to the first single. It combines some tribal chanting with classic rock rhythms on this ode to a woman with a unique name.

Side two opens with the voice of an operator at the start of “Wish You Were Here”, a straight up song full of admiration and longing desire. This soulful duet with Carrack was selected as the second single from the album, but only as a US release.

“Chicken and Feathers” is next.

Things slow down a bit with “Paid the Price”, a melancholy song of betrayal and heartbreak.

“Mess Around With Love” is another pure pop confection. The heavier piano notes on the bridge are kind of different for a change.

“Saint Beneath the Paint” is a rockabilly number about a woman who put on a façade when she’s all made up for a night out.

“How Do You Talk To an Angel” was the B-side to the second single. The song has a very intimate, personal quality with hushed tones and gentle strings.

For more of my Nick Lowe reviews, check out these links:

I thought I was the only one in the US that bought this one! (I later replaced my LP with a CD.) The CD is out of print now and commanding top dollar on the market.