Marillion - Script For a Jester's Tear 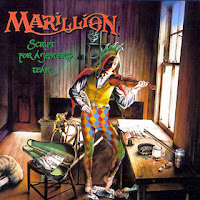 One would have thought by 1983 that progressive rock’s heyday was behind it. The UK band Marillion did not think so at all. Following in the footsteps of early Genesis, the Moody Blues and Yes, they led the charge of a neo-progressive musical movement.

This week (March 14th) marks the thirtieth anniversary of their debut album Script For a Jester’s Tear. While it stalled at 175 on the US Billboard Hot 200, the album spent 31 weeks total on the UK charts, peaking at number 7, and eventually went on to reach Platinum sales.


Though formed in 1979, the line-up for the band for this record was Fish (Derek William Dick) on vocals, Steve Rothery on guitar, Mark Kelly on keyboards, Pete Trewavas on bass and Mick Pointer on drums.

Side one begins with the epic title track, clocking in at just over eight and a half minutes. “Script For a Jester’s Tear” opens slowly and soft as the singer reveals his heartbreak.

“He Knows You Know”, the first single, peaked at number 35 in the UK and number 21 on the US Mainstream Rock charts. The theme of this anthem-like, rocking number is seeking treatment for drug abuse. It is the shortest track on the record, just under five and a half minutes, but is clearly my favorite on the first side.

“The Web” opens big and bold, throwing you right into the center of things, and then scales back like a movie giving you a flashback of what came before. Rothery gets a grand guitar solo on this one. I also really like Kelly’s keyboards near the end of this one.

Side two starts with “Garden Party”; as the second single, it reached number 16 in the UK. The lyrics here make light of the social elite who feel themselves above everyone else.

The moody “Chelsea Monday” tells of a young woman who daydreams of fame, only to end up an anonymous victim of murder.

“Forgotten Sons” is an ode to soldiers killed in the line of duty. The rhyming structure used on these lines is an interesting one - often in threes within a single line.

I was not really one to get into progressive rock in my youth and teenaged years. As such, Marillion and their debut were hardly in my musical sphere at all. As a mature listener, I can definitely appreciate more what they were doing here on Script For a Jester’s Tear.

There may be only six tracks here, but they clock in at close to fifty minutes in total. The musical scores are detailed and complex while the lyrics are more like Odyssey-like poems with nary a repetitive chorus to be heard. It is definitely a nice change of pace from my norm and something I could see listening to with the headphones on in a darkened room when one just wants to be swept away.
Posted by Martin Maenza at 4:30 AM