Alabama - The Closer You Get... 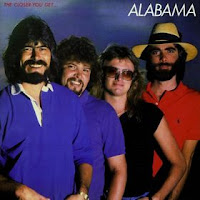 This month marks the thirtieth anniversary of the release of The Closer You Get..., the fourth studio album from Alabama. Just as their 1982 album Mountain Music did, this 1983 release also went multi-Platinum. On the charts, it went to number 17 in Canada, number 10 on the US Billboard Hot 200 and number 1 on the US Billboard Country chart.


Side one begins with the title track. "The Closer You Get" was written by J.P. Pennington and Mark Gray of Exile in 1980 and recorded three times (by Don King, Rita Coolidge and finally Exile) before appearing on this album. Alabama's version was the most successful, peaking at number 38 on the US Billboard Hot 100 and number 9 on the US Adult Contemporary chart; it also hit number 1 on the Canadian Country and Adult Contemporary charts, and number 1 on the US Billboard Country chart. I remember quite fondly the rich harmonies of this love song playing all over the radio and TV back in the day.

The second single "Lady Down on Love" stalled at number 76 on the US Billboard Hot 100. However, it went to number 18 on the US Adult Contemporary chart, number 10 on the Canadian Adult Contemporary chart, and number 1 on both the US and Canadian Country charts. This gentle ballad is bolstered by strings and orchestration, much more in line with easy-listening music than traditional country.

The slower tempo continues with "She Put the Sad in All His Songs", a tune about a musician taking heartbreaking inspiration from his own relationship.

"Red River" paints a picturesque image of the countryside of Louisiana - a place to relax and unwind with good friends. I like the rousing, upbeat tempo of this one.

"What in the Name of Love" closes out the first half on a mellower note as a man questions what has caused their relationship to fall apart.

Side two starts with "Dixieland Delight". As the first single, the gently rolling song about the perfect countryside date with the perfect lady went to number 1 on both the US and Canadian Country charts. The tempo change two-thirds of the way keeps this one from being too predictable.

"Very Special Love" was the B-side to the first single. The ballad opens with some sea-side sounds as it tells the tale of two people that comes from different parts of the country and share some special time at the beach that won‘t soon be forgotten.

"Dixie Boy" keeps the slower tempo going with a song about growing up in the South.

"Alabama Sky" reminisces about time spent with a grandpa while growing up.

"Lovin' Man", the final track, was also the B-side to the third single. It closes out the record on a more upbeat, country-rocking note. Jeff Cook, who penned the track, also sings lead vocals here.

I thoroughly enjoyed Mountain Music last year (click here for that review) and ended up downloading most of the tracks very soon after. As a result, I was certainly looking forward to The Closer You Get....

At a first pass, I am more partial to the up-tempo songs over the ballads here. If I were to download any, beyond the big title hit which already resides in my library, those are the first ones I would go for.
Posted by Martin Maenza at 4:30 AM