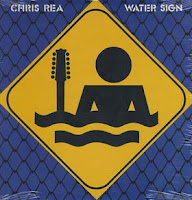 Following his self-titled fourth album in 1982 (click here for the review), Rea returned to the charts with Water Sign, his fifth studio album in March of 1983. This one charted at number 64 in the UK, number 33 in the Netherlands, number 30 in Germany, number 26 in France and number 7 in Sweden.

To celebrate the record's thirtieth anniversary, I decided to include the original US vinyl cover image - just because it was kind of cool and very 80’s looking. The other versions, including the 1998 CD release, have a plain white border with a small photo in the center.


Side one begins with “Nothing’s Happening by the Sea”, a laid-back ballad the flows gently like waves lapping on a sandy shore. Just listening to it, you cannot help but feel your daily cares just washing away. Claude Nobs provides the harmonica solo on this track.

Things pick up with “Deep Water”, thanks to the steady rocking synths and drums. The title refers to the various burdens and baggage each person carries in life. The saxophone solo is courtesy of Dave Richards.

“Candles” has a nice, moody atmosphere to it. The imagery of the lyrics is easily relatable, if a bit old-fashioned, - someone leaving a candle burning in the night in hopes that the wayward person might be able to find their way home. I like how near the end there is a faint beating, like a heart, in the background.

The slower tempo of “Love’s Strange Ways” features some beautiful guitar by Rea. It gives it a real exotic vibe.

“Texas” keeps things mellow with a song about visiting the Lone Star state one day.

Side two opens with “Let It Loose”. As the first single, it peaked at number 85 in the UK. I am rather surprised it did not do better than it had; I honestly do not recall ever hearing it here in the States. Given its synth rhythms, it certainly would have had a bit of commercial appeal along side the rest of the field in early 1983.

“I Can Hear Your Heartbeat”, the second single, charted at number 60 in the UK, number 25 in the Netherlands, number 14 in Ireland, and number 7 in Sweden. This one has a funky bass hook that I like a lot.

“Midnight Blue” is a strong, mid-tempo tune with a nice blend of keyboards and guitar. It reminds me a bit of Eric Clapton in its structure and melodies.

The third single “Hey You” went to number 12 on the Irish charts. It has a confident swagger to it and a light Caribbean touch as well.

“Out of This Darkness” closes things out with a smoky, urban tale that could easily have worked in some dance clubs.

My research tells me that by 1983 Chris Rea’s record label had become uninterested in him, and that they just released the raw demo tapes for Water Sign. Ironically, it turned out to become a surprising hit in Europe, selling over a half million copies in the first few months alone.

Water Sign was another of those albums that did not even hit my radar back in 1983, when I was mostly into new-wave and pop/R&B tunes. Then again, it might not have even popped up much here in the States at all given the label’s hand in things.

That’s one of the things I am really enjoying about doing this blog - being exposed to so much music that I might have missed out on otherwise. Chris Rea definitely served up forty minutes of solid music with this one. I have to wonder how much more it could have been improved by post-production polishing of these demos.
Posted by Martin Maenza at 4:30 AM