Frank Zappa - The Man From Utopia 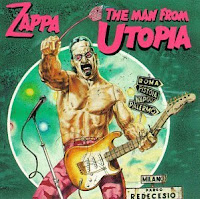 Following 1982’s Ship Arriving Too Late to Save a Drowning Witch (click here for that review), Frank Zappa returned to the studio to create The Man From Utopia. This album went to number 153 on the US Billboard Hot 200, number 87 in the UK and number 23 in Sweden. This week marks the thirtieth anniversary of its release.

The original vinyl track order and content varied a bit from the later re-release. As the norm, I will be examining the record as it first came out.


Side one begins with “Cocaine Decisions”, a blues-rock satire about high-profile drug usage. It took a few seconds, but I started to recall this one from back in the day - most likely either from the album-oriented rock or college radio stations. I like the harmonica through out and the backing vocals on the chorus.

“The Dangerous Kitchen”, a gross look at the mundane elements of daily living, embraces a cool jazz vibe.

“The Radio Is Broken” is the longest track on the album at nearly six minutes. Its lyrics involve elements of a science fiction B-movie science, delivered in a rather dopey manner. This one probably worked better on stage with some odd costumes and lighting.

The instrumental “Moggio” features synthesized sounds including that of a xylophone.

Side two opens with a narrative tale called “The Man From Utopia Meets Mary Lou”. It has a definite 1950’s feel to it.

I like how the predominant percussion of “Stick Together” bounces from speaker channel to speaker channel; it sounds very cool through my headphones. It draws from a reggae and gospel mix musically.

“SEX” has a heavy down-and-dirty guitar grind. It also popularized the phrase “the bigger the cushion the better the pushin’”, a phrase repeated over and over at the end of the chorus.

“The Jazz Discharge Party Hats” is another spoken-word piece set to a jazz groove. It sounds like it was recorded live given the audience sounds in the background. The profanity filled narrative tells of an evening spent with two coeds in Albuquerque.

The album closes with “We Are Not Alone”, a Ska-flavored instrumental that is heavy on the saxophone.

For me, the instrumental tracks from The Man From Utopia really work the best. There are lots of things going on in those compositions. I guess I never was very attuned to Frank Zappa’s humorous take on things, so the “story” songs just don’t do it for me.
Posted by Martin Maenza at 4:30 AM