The Tubes - Outside Inside 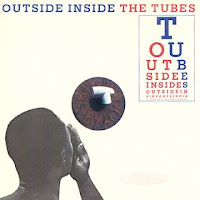 Just shy of two years after the release of The Completion Backward Principle (click here for that review), the Tubes released Outside Inside, their seventh studio album. It charted at number 77 in the UK and number 18 on the US Billboard Hot 200. Once again, David Foster was at the production reigns.

Today we look at this March of 1983 release to celebrate its 30th anniversary.


Side one starts with "She's a Beauty", a track co-written by Foster, lead singer Fee Waybill, and Steve Lukather (of Toto). The tune centers around a peep-show booth where any guy can talk to a pretty girl, but it will cost you. Most people of my age group will remember the popular MTV video which was choreographed by Kenny Ortega; he choreographed the group's famous stage shows and the dancers for the film Xanadu, and he would later go on to direct the High School Musical films, among other things. As the first single from the album, it went to number 79 in the UK, number 10 on the US Billboard Hot 100 and number 1 on the US Mainstream Rock charts. I have always liked this track, specifically for the catchy synth/guitar hooks and the vocal harmonies in the background of the chorus. The guitar solo on the bridge is pretty smoking too.

"No Not Again" is an interesting reaction to having one’s heartbroken.

"Out of the Business", an up-beat tune about being unemployed, has a wild sci-fi, hardcore opening. It is really a great big middle-finger at jobs we hate.

"The Monkey Time", a duet with Martha Davis (of the Motels) was released as the third single; it stalled at number 68 on the US Billboard Hot 100. However, on the CD release of the album, Davis' vocals were replaced with those of Michele Gray, one of the band's dancers. The song is a cover of the top-ten Curtis Mayfield R&B track from 1963, recorded by Major Lance. This version has a great dance groove to it and has plenty of sexual innuendos to boot.

"Glass House", which features some slinky sax, is a song about putting all the cards on the table in an emotionally open and vulnerable way.

Side two opens with the "Wild Women of Wongo". It goes from a choral opening to a primitive tribal groove. This certainly has great elements perfect for their theatrical live show live.

The second single "Tip of My Tongue" peaked at number 52 on the US Billboard Hot 100 and number 16 on the Mainstream Rock charts. The track, which features a very funky dance rhythm, was co-written by Maurice White (of Earth Wind & Fire) and Michael Snyder. The lyrics are dripping with sexual references of the oral variety.

The musical riffs of "Fantastic Delusion" sound like they stepped right off of a Styx or a Kansas album. The song celebrates the façade that some couples go through after being together for a long time.

"Theme Park" compares a night of romance to the thrills and spills of a famed amusement park.

"Outside Lookin' Inside" closes the record with a short conversation sample set to a grooving riff.

Once more, accept for the singles, I was not familiar with the entirety of Outside Inside. I really came to know the Tubes mostly from their appearances on MTV on those tracks back in the day. But listening to this album makes me definitely want to explore their back catalog a bit further.
Posted by Martin Maenza at 4:30 AM