Wall of Voodoo - Call of the West 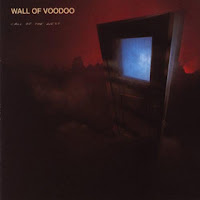 Call of the West, the second studio album from the Los Angeles based Wall of Voodoo, was released in the later part of 1982. It climbed the US Billboard Hot 200 charts all the way to number 45 in early 1983, thanks to a popular single and corresponding music video on MTV. Today, we will take a look at the album in celebration of its thirtieth anniversary.


Side one begins with "Tomorrow", a song the centers on procrastination. I like the rhythm on this one - very catchy and different.

"Lost Weekend", the very descriptive tale of an unfruitful trip to Las Vegas, has a strong mood setting opening between the synths and percussion. As the tune wanders down a barren highway, it gets introspective by the end.

The opening of the next track perfectly mirrors the sounds of a "Factory". Ridgway delivers the tale of a worker who has suffered a life-changing on-the-job injury with a very matter-of-fact way as if the man has totally given up on everything as a result.

"Look at Their Way" is another interesting musical composition. In a number of ways, it reminds me of songs by Oingo Boingo (which I am a huge fan). The chewing sounds at the end are rather unexpected, but it ties the whole aspect of watching others in public nicely. When eating alone, who doesn’t watch folks around them?

"Hands of Love" is told from the viewpoint of a lonely man whose only pleasure in life is self-derived.

Side two opens with "Mexican Radio", the hit second single from the record. It charted at number 64 in the UK, number 58 on the US Billboard Hot 100, number 41 on the US Mainstream Rock charts, number 33 in Australia and number 21 in New Zealand. From the first times I heard it, I liked this song about listening to broadcasts from across the border.

"Spy World", a song about clandestine lives, has another cool rhythm to it. I like the various percussion instruments and the surf-like guitar riffs here.

"They Don't Want Me" is up next. Ridgway’s vocal delivery is perfect for this new-wave track about rejection.

"On Interstate 15" was the first single from the album, released in 1982. The piano on this instrumental track contrasts nicely to the guitars and synthesizers.

The title track "Call of the West" closes out the record. It was also used as the B-side to the second single. The guitar riffs call to mind old spaghetti westerns.

Prior to doing this review for Call of the West, the only song I was very familiar with from it was “Mexican Radio”. And that was definitely my loss. Wall of Voodoo has crafted some very interesting tracks on this album, full of intriguing music and quirky character stories.
Posted by Martin Maenza at 4:30 AM