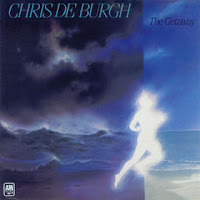 Today (December 19th) marks the thirtieth anniversary of the release of The Getaway, the sixth studio album from British singer-songwriter Chris de Burgh. This 1982 album went to number 443 in ton the US Billboard Hot 200, number 30 in the UK and number 1 in Germany. A number of the tracks charted from it world-wide as well.


Side one opens with the warning "Don't Pay the Ferryman". This first single went to number 48 in the UK, number 34 on the US Billboard Hot 100, number 32 in Canada, number 24 in Germany, number 9 in Ireland and number 5 in Australia. It is a four-star rated track in my music library; I became a big fan of this track especially after its music video hit heavy rotation on MTV and Friday Night Videos. The allusion to elements from Greek mythology like Charon and the River Styx really appealed to me; I've always been more partial to the Greek pantheons over their Roman counterparts.

"Living on the Island" switches gears in a completely different direction. This one has a mellow Calypso vibe that is relaxing and inviting.

The slow-tempo ballad "Crying and Laughing" was released as the B-side to the second single. The impression I got is that it tells the tale of an adulterous woman who leaves her lover to return home to her family.

"I'm Counting on You", a beautiful ballad sung to a sleeping daughter, features some passionate piano by David Caddick and cello by Nigel Warren-Green.

The up-beat title track "The Getaway" is next. This song about taking a respite from the day-to-day grind was released as the third single and charted at number 24 in Ireland and number 8 in the Netherlands.

Side two starts with "Ship to Shore", the second single from the album. It stalled at number 71 on the US Billboard Hot 100 and number 69 in Germany. The mid-tempo track has a dance beat with electronic synth elements. In doing this review, I believe I actually remember this track when it played briefly on the radio back in my high school years - particularly the chorus. Talk about a forgotten blast from the past.

"All the Love I Have Inside", a gentle song celebrating the little things in a relationship, was chosen for the B-side to the fourth single.

"Borderline" is a poignant piano-based ballad that pulls at the listener’s heart strings.

The final single was "Where Peaceful Waters Flow"; it charted at number 52 in Germany and number 17 in Ireland. It is a light, introspective number and features a backing choir and gentle woodwinds.

The final three tracks make up a nine-minute musical suite that works best when taken as a whole. "The Revolution" is a shorter, clandestine introduction. Then "Light a Fire" explodes with the start of the war. "Liberty", the longest of the three, looks at the results of the battle and the effects on those who partook in it.

While I had not heard most of The Getaway back in the day, I have to say I definitely found that I liked it a lot when listening to it for this review. On this album, Chris de Burgh serves up a number of pop-rock tunes with a good variety to them musically. It would have fallen right in line with the type of music I grew up on during the late 70’s. This is another album I have earmarked to add to my music library.
Posted by Martin Maenza at 4:30 AM