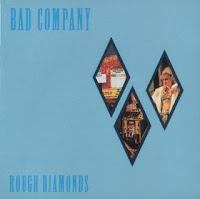 In August of 1982, the British rock band Bad Company released Rough Diamonds, their sixth studio album. It followed over three years after the previous one from 1979, and the sales seemed to reflect a cooling with the listening audience. Still, it charted at number 26 on the US Billboard Hot 200 and in Canada, and at number 15 in the UK.

It was also the last one by the group's original line-up of Boz Burrell (bass), Simon Kirke (drums), Mick Ralphs (guitar) and Paul Rodgers (vocals, guitar). As part of the thirtieth anniversary of the record, today we will take a look at the songs which it included.


Side one opens with "Electricland", the album's only single. Although it only charted at number 74 on the US Billboard Hot 100, it broke the top ten on the US Mainstream Rock charts. The song has a laid back feel to it as it describes an eye-opening adventure in a big neon city. The guitar work on this one really sings in a blues-rock fashion.

"Untie the Knot" served as the B-side to the single. This one has more of an R&B, funk groove sound to it, something I was not expecting at all from the band who I knew mostly from their heavier rock of the 1970‘s.

"Nuthin' on the TV" drops into the blues, complete with rollicking piano played by John Cook and smooth saxophone by Mel Collins. The lyrics lament the lack of anything good to watch, and that was long before the days of hundreds of cable channels (and I still feel the same way sometimes today).

"Painted Face" tells the tale of a street entertainer. It has a bit more of a rocking edge to it but still on the more restrained side.

"Kickdown" closes the first side with a hard-luck story of a guy who has been knocked down by life too often. Still, he keeps getting back up and starting over again.

Side two begins with "Ballad of the Band", a horn-enhanced quick-step throw down. It harkens back to the days of Chuck Berry in its rhythms.

"Cross Country Boy" is another piano-driven tune with a bit of slower strutting bridge about halfway through its three minute run.

The tempo slows down for "Old Mexico", a south of the border tale about a guy whose luck goes from bad to worse.

The funk comes back to the blues on the verses of the next track "Downhill Ryder".

"Racetrack" closes out the album with a tune about a competitive driver. For me, though, the song lacks the excitement and rush that one would associate with this career.

I definitely did not recall Rough Diamonds from back in my high school days. As noted previously, I knew Bad Company from a number of their earlier releases from which the album-oriented rock station played quite often. However, I think the three year absence from recording plus internal strife caused the group to put together a hodge-podge collection of songs for this album. While none of the songs are out-and-out bad, I think many of them might have come across as too different from their earlier offerings. This then led to a lukewarm reception across the board from critics and fans alike.
Posted by Martin Maenza at 4:30 AM