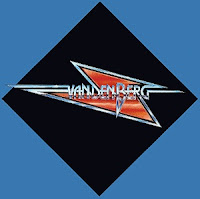 In 1981, the Dutch rock band Vandenberg was formed. The group was made up of lead singer Bert Heerink, guitarist/keyboardist Adrian Vandenberg, bassist Dick Kemper and drummer Jos Zoomer.

In early 1982, they went to Jimmy Page's Sol Studios to record their debut album. The self-titled Vandenberg was released near the end of 1982 and climbed the US Billboard Hot 200 charts to number 65. Today, we will take a look at this record as part of its thirtieth anniversary.


Side one opens with "Your Love Is in Vain". The track has a classic swagger to it that instantly brings to mind Van Halen and ZZ Top. It works as a fairly straight-forward rock song, but it contains no real big surprises.

"Back on My Feet" features some strong guitar riffs and pounding percussion.

"Wait" was released as the second single. The acoustic guitar opening is pretty cool. However, I caught something in the lyrics that I am sure was a big factor as to why it did not get much mainstream radio airplay (back in 1982 there were still words that the FCC did not allow on broadcasts).

The side closes with "Burning Heart", the first single from the album. This power-ballad charted at number 39 on the US Billboard Hot 100. Vandenberg’s guitar is matched well with the longing in Heerink’s vocals here.

Side two begins with "Ready For You", the B-side to the second single. The double-time tempo is a pleasant change-up from the earlier tracks.

"Too Late" barrels along on another driving rhythm and features a searing guitar solo.

"Nothing to Lose" is up next. While the music is again kicking, I found the lyrics here rather uninspiring and their delivery flat.

"Lost in a City" opens with a lot of potential but begins to wander aimlessly by the time the first minute passes. It finds its way back to the path around the time of the instrumental bridge though.

"Out in the Streets", the B-side to the first single, closes out the album. It starts off with a drum solo by Zoomer which is very welcome.

Listening to this record, there is little doubt that the guys in Vandenberg had the chops to play hard rock. Their sound was right in line with some of the big guns that were played all over the album-oriented rock stations at the time. I am sure I had heard a number of these tracks, besides the singles, over the years and did not even realize who the band was.

The problem for me with the tracks on Vandenberg comes in the lyrics; they just do not live up to the music. Maybe something got lost in the translation (English was likely a second language for Heerink). Hard to say. But it because of the lyrics that I would mark this record down to the just good category.
Posted by Martin Maenza at 4:30 AM