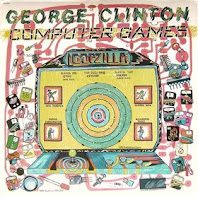 On November 5th of 1982, funk-master extraordinaire George Clinton released Computer Games, his first solo album away from Parliament and Funkadelic (the bands were both formally disbanded by Clinton a year prior). Today we will take a look at the record as part of its thirtieth anniversary celebration.


Side one begins with “Get Dressed”, a grooving backstage glimpse that illustrates the party is in full-gear even before the show begins.

Next up is a nearly thirteen-minute dance track entitled “Man’s Best Friend / Loopzilla”. A pruned down version of the later half, which quotes out lines from a variety of old-school songs, was released as the first single; it charted at number 57 in the UK, number 48 on the US Billboard Dance charts and number 19 on the US Billboard R&B charts.

“Pot Sharing Tots” is a little bit “out there” lyrically (I think Clinton was smoking a little too much at the time). However the music has a nice jazzy swing to it.

The title track “Computer Games” kicks off side two. I played a lot of early computer games back in the early 80’s(with my best friend on our Commodore 64’s, but I am not quite sure what Dracula has to do with them. I do like the unique game sound effects thrown in here though.

The second single “Atomic Dog” only reached number 94 in the UK, but here in the US it hit number 38 on the Billboard Dance charts and number 1 on the R&B charts. The album version clocks in at over seven-and-a-half minutes with a heavy, grinding groove. Clearly this track inspired a lot of artists over the years as it has been sampled at least two dozen times over the decades by a variety of hip-hop artists including MC Hammer, Ice Cube, Snoop Dogg, Public Enemy and Prince. I can remember when club deejays would sample the chorus as well back in the day, working up the crowd.

“One Fun At a Time” closes out the record with another danceable track.

Digging back in my memories, the track that most stood out from Computer Games for me was “Atomic Dog”. In listening to this one for this review, there are a number of other tracks that stick out as pretty cool too. If you are a fan of classic R&B and funk, you might want to check this one by George Clinton out.
Posted by Martin Maenza at 4:30 AM