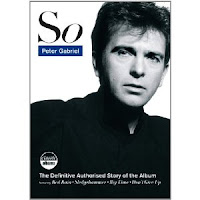 2011 marked the twenty-fifth anniversary of the release Peter Gabriel’s fifth album So and it was featured that year on the Classic Albums documentary series that ran at the time. In October of 2012, the episode was released on DVD and Blu-Ray by Eagle Rock Entertainment.

While I was very familiar with the album (click here for my review of the album), there was a lot I did not know about the behind the scenes of this landmark record. I had the opportunity to review this DVD this week and thought I would share a few of my thoughts on it.


First off, the people interviewed here present a detailed, compelling story. Besides Peter Gabriel himself, we also hear from co-producer Daniel Lanois, engineer Kevin Killen, and musicians Laurie Anderson, Manu Katche, Tony Levin, Jerry Marotta, and more. You can tell by how passionately they speak about the making of this music that it was a meaningful experience. And when you consider how much of a perfectionist Gabriel is, with a project that took nearly a year to record, you can tell the time they invested in it was worthwhile.

The broadcast breaks down into sections relating to each of the songs - “Red Rain”, “Sledgehammer”, the duet with Kate Bush “Don’t Give Up”, “Mercy Street”, “This Is the Picture (Excellent Birds)” and “In Your Eyes”. We are also given a tour of the recording studio that was converted from the barn at Gabriel’s Ashcombe House, and an explanation of why the running order of tracks was changed up between the original vinyl release and the first CD release.

But if you have seen this episode just on TV, you are missing part of the story. The DVD release includes over 35 minutes of additional footage that did not appear on TV. This includes coverage of the song “Big Time”, discussion of Gabriel’s involvement in the Amnesty Tours at the time, a more in-depth look at the groundbreaking music video for “Sledgehammer” and cut scenes from the section on “In Your Eyes”.

If you or someone in your social circles is a big Peter Gabriel fan, this might be a DVD you want to pick up. It could make for a great last minute stocking stuffer this holiday season, or something you can spend that gift card on from your favorite retail or online store.
Posted by Martin Maenza at 4:31 AM