The Jam - Dig the New Breed 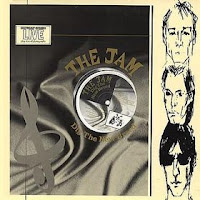 Today (December 10th) marks the thirtieth anniversary of the release of Dig the New Breed, a collection of live performances from the English rock band the Jam. Spanning the years from 1977 to 1982, this compilation album reached number 2 in the UK and number 131 on the US Billboard Hot 200.

It was also the final release of “new” material by the band before they broke up that same month.


Side one opens with "In the City", which was recorded at the 100 Club in London on September 11th of 1977. At just over two minutes in length, it is a rapid-fire punk anthem.

The next three tracks - "All Mod Cons", "To Be Someone (Didn't We Have a Nice Time)" and "It's Too Bad" - were all recorded at the Rainbow in London on December 13th of 1979. Again, you have a number of shorter tracks but they are a bit more seamless having come from the same show.

The side finishes off with a trio of tracks - "Start!", "Big Bird" (a solid cover of the 1967 song by American R&B singer Eddie Floyd) and "Set the House Ablaze" - taken from the December 14th of 1981 performance at Hammersmith Palais in London. You can definitely tell the quality of the recordings improved as the timeline of this side progressed with the band sounding a bit more polished live on this later grouping. I like how the guys have some extra space to jam a bit on the final track of the three.

Side two begins with "Ghosts", taken from the Bingley Hall show in Birmingham on March 21st of 1982.

Jumping back to February 16th of 1979, "Standards" was recorded at Reading University. I probably would have put this track first on side two, just to keep the higher quality 1982 recording all together without a break.

"In the Crowd" was record at the Edinburgh Playhouse on April 6th of 1982.

The album then closes with a set taken from the April 8th of 1982 show at Glasgow Apollo. This includes the tracks "Going Underground", "The Dreams of Children", "That's Entertainment" and "Private Hell".

Dig the New Breed gives a good sampling of songs from the group’s catalog up through the 1981 albums. For folks who may have just discovered the Jam through The Gift earlier in 1982, this may have been a gateway for them to the previous albums.

As a live album, it works well enough. For me, live albums can be hit-or-miss. I tend to prefer live albums from groups I have seen in concert (it is like reliving that experience of the show) or those that really bring something different to the recordings versus their studio work. Having never seen the Jam live, I only have the comparison of here versus the studio albums. I tend to prefer the latter in this case.
Posted by Martin Maenza at 4:30 AM