Bob Seger and the Silver Bullet Band - The Distance 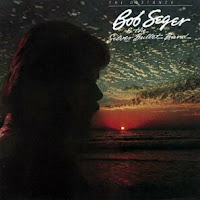 This month marks the thirtieth anniversary of The Distance, the twelfth studio album from American rock singer Bob Seger. It was also the fourth and final album he would record with the Silver Bullet Band. This December 1982 release was a Platinum seller in both the US and Canada. Chart-wise, it reached number 45 in the UK, number 19 in Austria, number 16 in Germany and number 5 on the US Billboard Hot 200.


Side one opens with "Even Now" which, as the second single, went to number 12 on the US Billboard Hot 100 and number 2 on the Mainstream Rock charts. It also reached number 73 in the UK and number 35 in Canada. This track about long distance relationships opens big with the keyboards, guitars and percussion and just keeps going. I remember this one coming on the radio a ton back in the day, and I never tired of it. It is still a favorite today after three decades.

"Makin' Thunderbirds" is a rollicking number about working on the assembly line of an automotive plant. Bonnie Raitt joins in on the vocal harmonies of this track.

"Boomtown Blues", the B-side to the third single, was popular on the US Mainstream Rock charts, reaching number 11. The opening guitar riff just brings to mind cruising down the open roads with the windows down and the radio turned up loud. It reminds me a bit of “Barracuda” by Heart.

"Shame on the Moon" was the huge first hit single from the record. It went to number 2 on the US Billboard Hot 100, blocked by Michael Jackson's "Billie Jean" for the top spot for four straight weeks. It did make it to number 1 on the US Billboard Adult Contemporary charts though. It also crossed over to the Billboard Country charts where it reached number 15. This one is a great introspective song to just kick back and chill to.

"Love's the Last to Know" is a moving piano ballad. I really get into Craig Frost’s keyboards here.

Side two begins with "Roll Me Away". This third single made its way to number 27 on the US Billboard Hot 100 and number 13 on the Mainstream Rock charts. That song has appeared in a number of films including Reckless (1984), Mask (1985) and Armageddon (1998). The lyrics evoke the imagery of taking off on the open road with someone, looking for freedom and adventure. Again, another one to play loud on a long road trip.

"House Behind a House", the B-side to the first single, climbed to number 29 on the US Mainstream Rock charts. It has another great guitar hook that grabs you and holds on tight. Alto Reed has a searing saxophone solo on this deep track.

Seger is backed by the Muscle Shoals Rhythm Section for the next track. "Comin' Home" has that small town feel to it, painting a picture of places in America like where I grew up.

"Little Victories", used as the B-side of the second single, closes out the record.

I’ve always been a fan of Bob Seger’s deep vocals with lush piano and guitars for accompaniment. The Distance features some classic rock and roll from my senior year of high school that takes me right back when I listen to it. Good, solid stuff which, unfortunately, is not readily available for download. And that is definitely a shame.
Posted by Martin Maenza at 4:30 AM