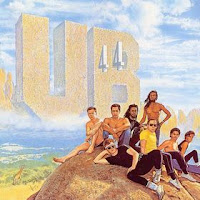 September of 1982 was the released date of UB44, the third studio album from the British reggae/pop band UB40. Just as the band's name came from a British unemployment benefits form, so too does the name of this album (a UB44 means they missed their "signing on" appointment).

The record reached number 4 on the UK charts and number 15 in New Zealand. Today, we will take a listen to it to celebrate its thirtieth anniversary.


Side one starts with "So Here I Am", the album's third single. It reached number 25 in the UK and number 16 in Ireland. Earl Falconer lays down a funky bass groove while Mickey Virtue brings up some interesting sounds via the keyboards. The lyrics tell of toiling away in a factory, making minimum wage and barely getting by.

The first single released was "I Won't Close My Eyes"; it climbed to number 32 in the UK and number 25 in Ireland. This one speaks of the injustices of the world in order to raise social consciousness to them. However, where a punk band would rage against them, UB40’s reggae sound is more of a peaceful protest.

On "Forget the Cost", the band makes a statement on how nations chose to spend tax dollars on some things (space travel, war) rather than on others (helping the poor).

"Love Is All Is Alright", the second single, hit number 29 in the UK, number 26 in Ireland and number 22 in the Netherlands. Brian Travers’ saxophone helps set up the very mellow mood of this song about racial relations.

"The Piper Calls the Tune" makes a political statement about a leader who controls the fate of future generations in his actions. It does not end very well.

Side two opens with "The Key", a celebration of reggae and its roots. Lead singer Ali Campbell goes for a more traditional ranking rap style on this one.

"Don't Do the Crime" seems like an extension of the first track on side one, with a man barely getting by and wondering if turning to crime might be the way to go. The song really does not give any answers accept for the opening like warning of “don’t do the crime if you can’t do the time”.

"Folitician" served as the B-side to the first single. This one takes a swipe at politicians and their promises to get elected, many of which never are fulfilled. It too is sung in the ranking rap style.

"The Prisoner" closes the album with another funky groove. As the longest track, it has an extended instrumental opening. The lyrics are a summary of the songs before, with a poor man who has turned to crime and now finds himself turning to drink. The line “a prisoner in the land of the free” really sums it up.

UB40 used their music to act as a voice of the people. What I find interesting about UB44 is that many of the songs presented here are just as relevant today as they were thirty years ago.
Posted by Martin Maenza at 4:30 AM