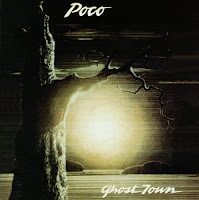 September 20th of 1982 was the release date of Ghost Town, the seventeenth studio album from California southern-rock band Poco. The album barely cracked the US Billboard Hot 200, stalling at number 195. At this time, the band was made up of Paul Cotton (guitar and vocals), Rusty Young (guitar and vocals), Kim Bullard (keyboards), Steve Chapman (drums), Steve Forman (percussion) and Charlie Harrison (bass). Today, we will take a look at this one for its thirtieth anniversary.


Side one opens with the lush strings of the title track. As the first single, "Ghost Town" reached number 108 on the US Billboard charts. I could not recall if I had heard this one back in the day. It is a rich piece with a great mood to it.

The mid-tempo "How Will You Feel Tonight" is pleasant enough but stays in a safe-zone lyrically.

"Shoot For the Moon", the second single, went to number 50 on the US Billboard Hot 100 and number 10 on the Billboard Adult Contemporary charts. This slower-tempo tune goes for a more intimate exchange between lovers; it is delivered in a gentle, pillow-talk tone.

The B-side to the second single was "The Midnight Rodeo". This one has a bit more energy as well as a different kind of rhythm to the drums that quickly caught my attention.

"Cry No More", a song full of encouragement, slows the pace back down again to close out the first half of the record. The vocal harmonies on the chorus pair well with the steel guitar.

The B-side to the third single was "Love's So Cruel".

"Special Care" is a guitar-driven track about that unique attention one gets from the person they love. I did detect some synthesizer on the keyboards on this one.

"When Hearts Collide" slows things down once more with a tune about the fragile nature of being in love.

The closing instrumental track "High Sierra" served as the B-side to the first single. Its opening chords bring to mind the wide-open spaces of the American mid-west. You can almost see the crimson Sun setting along the flat expanse of land before you.

I am really surprised that Ghost Town did not do better on the charts. It has that late 70’s Eagles sound to it musically that makes for an easy-listening experience while you unwind after a busy day. Then again, maybe that is a double-edged sword; the music landscape was changing rapidly in the early 80’s yet Poco stuck with what they did best.
Posted by Martin Maenza at 4:30 AM