Foghat - In the Mood for Something Rude 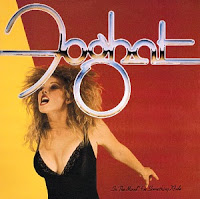 October of 1982 saw the release of In the Mood for Something Rude, the eleventh studio album from the British hard rock band Foghat. The band roster at the time consisted of Dave Peverett (rhythm guitar, vocals), Erik Cartwright (lead guitar), Nick Jameson (bass) and Roger Earl (drums).

The album, which went to number 162 on the US Billboard Hot 200, takes a group of R&B and country tunes by other artists and puts them through a blues-rock spin-cycle. Today, we will take a look at this record as part of its thirtieth anniversary celebration this year.


Side one starts with "Slipped, Tripped, Fell in Love", written by George Jackson. This mid-tempo track was released as a single for Foghat but failed to make much noise on the charts.

"Bustin' Up or Bustin' Out" keeps to a similar tempo and is executed quite cleanly. It reminds me of a hybrid of Led Zeppelin (vocally) and ZZ Top (musically).

"Take This Heart of Mine" was written by Smokey Robinson and the Miracles, charting for Marvin Gaye in 1966. I have to say that Foghat really puts a unique spin on this song, making it into something totally different from the original.

"Love Rustler" was first recorded in the 1970's by Delbert McClinton. The guitar opening and the drumbeats on this cover gets my engine racing; the saxophone solo is just the icing on the cake. It is easily my favorite track on the first side of this album.

Side two opens with "Ain't Livin' Long Like This", written by Rodney Crowell for the title track of his 1978 country debut. Emmylou Harris recorded it the same year and Waylon Jennings recorded in in 1979. The guys give this one a down-and-dirty sound.

"Back For a Taste of Your Love" is a cover of the title track of Mississippi blues-man Syl Johnson’s 1973 album.

"There Ain't No Man That Can't Be Caught" was written by 60’s soul singer/songwriter Jimmy Lewis.

The album closes with James Brown's "And I Do Just What I Want". This version by Foghat has a heavy, rapid-fire rhythm that tears the house down. I like the attitude of the song a lot.

I honestly have to say I do not recall In the Mood for Something Rude at all. If they played it on the album-oriented rock station we listened to, I likely would have confused these Foghat tunes with Zeppelin easily. Despite that, though, it is a record that really jams and puts a new take on some older tunes. I actually enjoy the fact that most of the original songs were unknown to me so I could come into Foghat’s versions with a clean perspective.
Posted by Martin Maenza at 4:30 AM

Great review of one of my dads best albums (he was Lonesome Dave from Foghat). Did you ever see the video for "Slipped..."? Rock on.
Jason
Thepeverettphile.blogspot.com