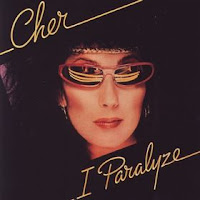 On May 28th of 1982, Cher released I Paralyze, her eighteenth studio album and only one on the Columbia label. John Farrar, who worked for many years with Olivia Newton-John, was one of the two producers of the record; the other was David Wolfert. Some of the musicians who also worked on the album include guitarist Steve Lukather (of Toto), guitarist Sid McGinnis (who would later go on to be part of the band for the Late Show with David Letterman, and jazz bassist and keyboardist Nathan East.

I Paralyze was only promoted on shows like American Bandstand and Solid Gold. It failed to make any major chart impacts though, leading to a five-year recording hiatus for the singer/actress.


Side one opens with “Rudy”, the lead first single from the album. The song, with a pop-rocking melody, is a translated cover of one done in 1981 by the French singer Dalida.

“Games” is up next. Bassist Howie Epstein from Tom Petty’s Heartbreakers was one of the writers of this track. I like how Cher’s voice works well with the guitars on this one.

The title track “I Paralyze” was released as the second single from the album. The music features some slinky synthesizer riffs. Even though it failed to score on the charts, Cher has said on the 2000 Behind the Music series that the song is a favorite of hers.

Desmond Child wrote “When the Love Is Gone”, a lovely piano ballad that really allows Cher to let loose her powerful voice. This was the first of a number of songs he wrote that she would record over the years.

“Say What’s On Your Mind”, with a rocking strut and a doo-wop chorus, is a song about keeping the communication lines open and honest.

Side two begins with “Back On the Street Again”, a variation on the 1980 song “Back On My Feet Again” by the Babys. This version has a solid synth spin to it musically as well.

The B-side to the second single was “Walk With Me”. The percussion rhythm reminds me a bit of girl-group songs from the 60’s from the likes of the Shirelles.

“The Book of Love”, another Child track, looks at the ups and downs of relationships with a rat-a-tat rocking tempo.

The country-flavored “Do I Ever Cross Your Mind”, the B-side to the first single, closes the album.

I have been a Cher fan for as long as I can remember. As a kid, I remember fondly watching Sonny and Cher at my grandparents’ house. She was always such a striking woman with a wonderful wit and amazing voice. I had not heard any of I Paralyze until doing this review. I found it to be a good collection of songs, well-arranged and delivered solidly by Cher. This one is not available for digital download at this time, most likely because it was part of a short-lived stint on a label that fails to see the worth of making it available. Maybe Columbia Records will rectify that in the future.
Posted by Martin Maenza at 4:30 AM