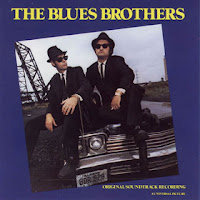 In June of 1980, comedians John Belushi and Dan Aykroyd took their characters from a Saturday Night Live musical sketch and spun them off into a full-length feature film. Directed by John Landis, The Blues Brothers told the story of Jake and Elwood Blues on “a mission from God” to save the Catholic orphanage they grew up in from being foreclosed. This led to a rollicking R&B road-trip with a number of amazing guest appearances from the pantheon of soul and blue music.

To go along with the film, the Blue Brothers released their second album as a soundtrack to the film. It was released on June 20th of 1980 and spent a total of nineteen weeks on the US Billboard Album chart, peaking at number 13. Today, we will give this one a spin on the virtual turntable.


Side one starts with “She Caught the Katy”, a blues standard first recorded by Taj Mahal in 1968. Belushi’s smooth vocals really impress me here. This version was released on the B-side of the single for "Gimme Some Lovin'".

“Peter Gunn Theme” became popular thanks to the TV detective show Peter Gunn which ran from 1958 to 1961. The band does a solid rendition of this classic, catchy instrumental. The saxophone “storm” is provided by Tom Malone and Lou Marini, both of the Saturday Night Live band at the time.

“Gimme Some Lovin’”, the single from the album, went to number 18 on the US Billboard Hot 100. The original song was written and recorded by the Spenser Davis Group in 1966. I had this film’s version on a 45 RPM back in the day; I just loved the energy of the tune.

The legendary Ray Charles joins in for “Shake a Tail Feather”, a dance song first recorded in 1963 by the Chicago-based Five Du-Tones.

“Everybody Needs Somebody to Love” was first recorded in 1965 by Solomon Burke.

James Brown lends a hand on “The Old Landmark”, an original tune where he is backed by the Rev. James Cleveland Choir. Naturally, the song has a very strong gospel sound to it.

Side two begins with Aretha Franklin and a refreshing remake of her classic “Think”, a top 10 chartbuster from 1968.

The western “Theme from Rawhide”, a song about working the cattle drive, was used on the CBS TV drama Rawhide which ran from 1959 to 1966.

Cab Calloway lends his voice to his signature tune “Minnie the Moocher”, a jazz classic first recorded by Calloway in 1931. The show-stopping film appearance likely introduced Calloway to a whole new generation.

“Sweet Home Chicago” is a popular blues standard written and recorded by Robert Johnson in 1937. The band really works this one out with a nearly eight-minute long track; it features a number of strong instrumental solos.

A cover of “Jailhouse Rock” closes the album and the film. Elvis Presley had a number 1 hit in the US in 1957 with the original. Belushi channels the spirit of the King on this one.

I am pretty sure I saw The Blues Brothers up on the big screen during the summer of 1980 (if not, I definitely caught it a couple times on HBO afterwards). What I like about the film and this soundtrack album is how Belushi and Aykroyd took songs they loved from their youth and served them up for a whole new audience.
Posted by Martin Maenza at 4:30 AM