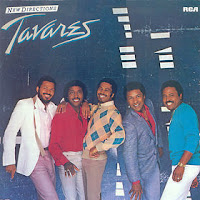 Back on August 24th, New Directions, the eleventh studio album from the R&B group Tavares, celebrated its thirtieth anniversary. Since I missed reviewing it a few months ago, I thought I would talk about this 1982 release today from five talented siblings (Ralph, “Pooch” (Arthur), “Chubby” (Antone), “Butch” (Feliciano) and “Tiny” (Perry)).

It charted at number 137 on the US Billboard Hot 200 and number 30 on the Billboard R&B charts. It was also the first of two albums they recorded on the RCA label (the last and the group's final album would come in 1983).


Side one begins with "A Penny for Your Thoughts", the lead single from the record. The Grammy nominated song went to number 33 on the US Billboard Hot 100, number 16 on the R&B charts and number 15 on the Adult Contemporary charts. The verses are sung in a deeper vocal style while the chorus is done in a higher falsetto range. Together, they tell of a woman who has not been so truthful about her feelings and the man who pleads with her to just be honest. I very much remember this one playing on the radio back in the day; it has one of those choruses that sticks with you once you hear it.

"I Hope You'll Be Very Unhappy Without Me" continues the narrative, with the woman finally revealing the truth and breaking the man’s heart. He tries to take the break-up amicably but in the end really cannot wish her well.

"Mystery Lady" is a gentle ballad with a lovely piano-played melody.

The tempo remains slower with "Abra-Ca-Dabra Love You Too". The song really showcases the harmonizing power of the five brothers.

Side two opens with "Got to Find My Way Back to You", the second single from the album; it went to number 24 on the US Billboard R&B charts. The track features a syncopated groove that is made for dancing to. The lyrics are an urgent attempt to get back together with a former love.

The narrative continues to this next track. "Maybe We'll Fall in Love Again" keeps the party going with another funky rhythm. This one definitely puts me in a mood to boogie.

"The Skin You're In" was the B-side to the first single. I like that it has a bit more of a harder edge to it, just to change things up a bit. It is a song boiling over with lust and desire, yet it is delivered in a classy and not crude way. I think today’s songwriters have forgotten that subtle art of sexuality.

"Wanna Be Close To You" closes the album on a high note with another great dance groove. The percussion really takes me over here.

My first exposure to Tavares came during the disco years of the late 1970's, especially on the Saturday Night Fever soundtrack. New Directions is a decent R&B album with a good mix of up-tempo tunes and ballads. I really like how the songs can be placed together to tell an overall story of love found, lost and possibly recovered again.
Posted by Martin Maenza at 4:30 AM