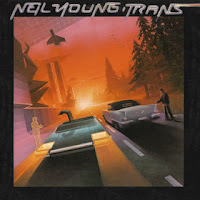 Today (December 29th) marks the thirtieth anniversary of the release of Trans, the twelfth studio album from Canadian rocker Neil Young. This 192 release went to number 29 in the UK, number 23 in Australia, number 19 on the US Billboard Hot 200, number 10 in Canada, number 8 in New Zealand and number 6 in Sweden.

Young played guitar, bass and piano as well as did the lead vocals. On a bulk of the tracks, he also used a Vocoder to give his voice a more electronic sound. Joining him on the album were Nils Lofgren (guitar, piano, organ), Ben Keith (guitar), Bruce Palmer (bass), Ralph Molina (drums), Joe Lala (percussion), Frank Sampedro (guitar) and Billy Talbot (bass).


Side one opens with "Little Thing Called Love". As a single, it went to number 71 on the US Billboard Hot 100 and number 12 on the US Mainstream Rock charts. It has a southern-blues-rock rhythm to it at the start before adding some other musical elements as well. The percussion stands out to me too.

"Computer Age" then takes things in a slightly different direction by adding the electronic-techno elements to it. It is funny to think back that the age of computers was just starting to permeate the world outside of science and business in the early 80’s. I can remember using my first computers in a programming class in my junior year of high school (1981 to 1982); my cell phone today has more power than those heavy Commodore models we had in the classroom.

"We R in Control" was also popular on the US Mainstream Rock charts, peaking at number 42. This one has sci-fi theme to it, with unseen mechanized overlords in charge of our lives. It is right out of games like “Robotron” and “Bezerk” that I was playing in the arcades at the time.

"Transformer Man" continues the theme from the previous two tracks with a gentler piece.

"Computer Cowboy" wraps up this electronic suite from side one with the story of Syscrusher, a cyber-western hero. I like the faint hoof clops in the background.

Side two begins with "Hold On to Your Love". Like the opener of side one, this one is more of a traditional rock piece, albeit lighter thanks to the piano and organ elements.

And with "Sample and Hold" we jump right back to the digital world again. I have to admit that the transmissions back and forth are a little jarring, even for me. More on that in a bit. At eight minutes, this is the second longest cut on the album.

"Mr. Soul" is a remake of the 1967 song that Young performed as part of Buffalo Springfield. This more electronic version of the song was popular on the US Mainstream Rock charts, climbing up to number 14.

The album closes with the eight-plus minute long "Like an Inca". Again, we go back to a more traditional rock number with rich percussion.

Trans is definitely a different kind of beast. For me, the record has two different directions that I think do not work very well together. I actually prefer when Neil Young sticks to the traditional rock approach as those songs come across as rich and full. The electronic ones with the Vocoder vocals are sterile and cold.
Posted by Martin Maenza at 4:30 AM