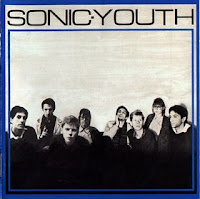 In March of 1982, the alternative rock band from New York City named Sonic Youth released their self-titled debut record. At the time, the group was made up of Kim Gordon (bass and vocals), Thurston Moore (guitar and vocals), Lee Ranaldo (guitar and vocals) and Richard Edson (drums). Edson left the band before their next recording a year later.

Because of its short length, less than twenty five minutes total, the 1987 cassette re-release basically gives you the album twice - once on each side. However, the song order on the second side went from last to first, a rather interesting way to go. That certainly saved on rewinding back in the day, if that was your music format of choice.

Let’s take a look at this debut as part of its thirtieth anniversary celebration.


Side one begins with “The Burning Spear”. The song has a nice slow-build, from a simple drumbeat to “chiming” guitars (I like that effect) to a variety of feedback sounds with the guitars.

I like what Gordon does with her bass at the beginning of “I Dreamed I Dream”. Her vocals here fit perfect for this lethargic sounding song. She even keeps the laid-back tone when spitting the curse-filled chorus.

Edson‘s percussion has a tribal rhythm on “She Is Not Alone”; it gives the whole track a ritual feel. Even the vocals add to the hypnotic effect.

Side two starts with “I Don’t Want to Push It”. Once more, we are given another interesting rhythm.

The instrumental “The Good and the Bad”, which clocks in at nearly eight minutes in length, closes the second side. Gordon and Moore swap instruments on this one (she taking the guitar, he taking the bass).

I have to admit that coming into listening to Sonic Youth I had very little listening exposure to the band’s songs. I think I knew one track from either the Guitar Hero or Rock Band video games. It was definitely not the type of music I listened to back in high school when the album was first released. After a first pass, though, I have identified a number of tracks from here that I will be adding to my music library in the future.
Posted by Martin Maenza at 4:30 AM