Level 42 - The Pursuit of Accidents 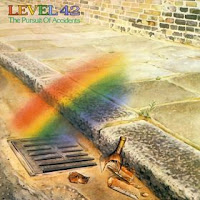 This year marked the thirtieth anniversary of the release of The Pursuit of Accidents, their third studio album. It charted at number 17 in their native UK and number 31 in Norway. It also generated a trio of singles.


Side one opens with "Weave Your Spell"; as the second single it reached number 43 on the UK charts. The combination of the synths, the bass and the percussion makes for a very funky and danceable groove here.

The instrumental title track is next. "The Pursuit of Accidents" too features King’s prominent bass right from the start. Clocking in at nearly eight minutes in length, it simmers quite well into a delicious jazz/funk feast.

"Last Chance" is a light, up-beat request for reconciliation.

The first single "Are you Hearing (What I Hear)?" went to number 49 in the UK. Pete Wingfield, who had a hit in 1975 with “Eighteen With a Bullet”, guests on this track playing the clarinet.

Side two starts with "You Can't Blame Louis", a coming of age tale of a small town boy with big dreams.

"Eyes Waterfalling" opens with a very mysterious movement. Then, a more up-tempo groove is ushered in with a steady beat. The lyrics though are full of sadness and despair.

"Shapeshifter" is another instrumental track with a number of layers.

The album closes with "The Chinese Way", which was released as the third single in early 1983. It went to number 45 in the Netherlands, number 27 in Ireland, number 26 in Belgium and number 24 in the UK. The album version is a bit longer, giving the band room to let the music strut on this ode to the ancient oriental life.

Level 42 did not come on to my music radar until later in the 1980’s, so I completely missed The Pursuit of Accidents until it came time to do this review. I definitely like the band’s sound on these songs and the whole vibe they give off. With an older viewpoint, I appreciate the compositions that I likely would not have done so as much when I was seventeen years old.
Posted by Martin Maenza at 4:30 AM

Hi Martin,
I'm off work sick so thought I would pop back to your site for some brain food!
So nice to see an American perspective on my favourite band ever. I've seen them live many times (and shook their hands last time out!).
Whilst this is a good album, I would heartily recommends "World Machine" from 1985. In fact, I think I'd recommend all of the 80's albums!!

I found that once the Gould brothers left, some of the creative spark went and the music became a little formulaic, but I still love them!

Thanks for your reviews... it makes my sickbed more comfortable :-)