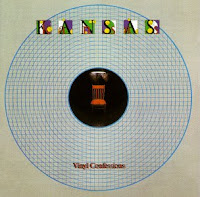 In the early 1980's, the American rock band Kansas was going through changes in direction. Kerry Livgren (guitars and keyboards) and Dave Hope (bass) both had converted to Christianity which was reflected in the lyrics of tracks that Livgren wrote. Lead singer Steve Walsh was not on-board with the new direction and left the band. After an audition process, John Elefante joined the group on vocals and keyboards.

The band released Vinyl Confessions, its eighth studio album, in June of 1982. It did well on the US Billboard Hot 200 chart, climbing all the way to number 16. Part of that was due to a handful of singles that were popular on the Mainstream Rock charts.


The new direction of the music did get Kansas some press in a number of Christian magazines. The Contemporary Christian Music association chose the record as its number one album for 1982. Today we will take a look at it as part of its thirtieth anniversary celebration.

Side one begins with "Play the Game Tonight"; as the first single it went to number 17 on the US Billboard Hot 100 and number 4 on the Mainstream Rock charts. It also went to number 35 in Canada. I like the piano opening and how it builds in a dramatic way. The music video for the song played up the elements of good versus evil in the lyrics.

The second single "Right Away" stalled at number 73 on the US Billboard Hot 100; it did a bit better on the Mainstream Rock charts where it reached number 33. The song appears to be a relationship song on the surface, about enduring difficult times. Roger Taylor of Queen provided backing vocals on this track and a few others.

The lyrics of "Fair Exchange" describe a temptation of an offer, promising reward and comfort in exchange for giving up choice and freewill. There is a whole "too good to be true" vibe to it.

"Chasing Shadows", which examines the quest for Biblical truth, charted at number 54 on the US Mainstream Rock charts.

"Diamonds and Pearls" implies the importance of spiritual fulfillment over materialistic gains. I like the piano playing on this one as well as the full blown orchestration with horns and strings. It gives the whole track a bigger, fuller voice.

Side two starts with "Face It", a song about coming to a conclusion that what had been done previously was not working and that a change needs to happen. The solemn violin opening moves quickly to a harder rocking edge.

"Windows" continues along the route of change, of finding an “open window” when a “door” has been shut in your life. The rhythm on this one is quick and catchy. It is definitely a favorite of mine after the singles.

"Borderline" is about standing at a crossroads and facing a major choice. This one has those signature Kansas vocal harmonies that I have always enjoyed.

"Play On" has a message of inspiration and faith behind it, finding the strength to carry on to a new tomorrow. Again, the piano portions give it an epic musical feel.

"Crossfire" closes the album on an uplifting note with a lovely song about redemption and renewal.
Posted by Martin Maenza at 4:30 AM