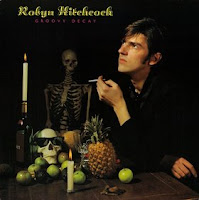 In March of 1982, English singer-songwriter Robyn Hitchcock released Groovy Decay, his second solo album after leaving the Soft Boys. Today, we will look at that album as part of its thirtieth anniversary celebration.

Performing along with Hitchcock on the album were Sara Lee (bass player from the Gang of Four), Anthony Thistlethwaite (saxophone player from the Waterboys), Rod Johnson (drums), and Matthew Seligman (bass). The record was produced by Steve Hillage, a former member of the Franco-British band Gong.


Side one begins with a “Night Ride to Trinidad”, a swinging re-accounting of a horrible trip. I really like the pronounced use of saxophone here.

“Fifty Two Stations” tells the tale of a stalker on a metro train line and the woman with whom he is obsessed. The drums and guitars set up a very moody backdrop here, and I quickly found myself instinctively doing the “ooo-ooo-ooo” backing vocals before the track ended.

“Young People Scream” is a rousing groove about the generation gap.

The percussion and the vocals on “The Rain” set up the melancholy mood perfectly, with a little wistful sax thrown in for good measure.

Chris Cox appears on trumpet for “America”, a cynical commentary on the US from someone from another country.

Side two starts with “The Cars She Used to Drive”, the story of a spoiled rich girl with little appreciation of what she has.

“Grooving on an Inner Plane” opens with a fantastic bass line that drives this track down a slinky, funky path.

The mood gets downright gloomy with “St. Petersburg”, thanks to a haunting guitar and curt yet heavy lyrics.

“When I Was a Kid” has a mocking manner to it much like an immature, disrespectful youth. The lyrics are full of rebellion.

“Midnight Fish” closes the album on a bit of a randy note. The sexual euphemism from the title is clever.

Unhappy with the end result, Hitchcock released a revised version of the album in 1985 under the title Groovy Decoy. He substituted five of the tracks with demo versions and re-ordered everything.

Back in the day, Robyn Hitchcock was not on my music radar at all. I actually discovered his music through XM radio just a number of years ago. Then I listened to Groovy Decay for the very first time for this review. What a welcome surprise! I really found myself getting into this record on my inaugural run through the tracks. I liked the music a lot and found Hitchcock’s lyrics to be intriguing.
Posted by Martin Maenza at 4:37 AM