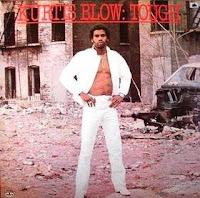 Today we will mark the thirtieth anniversary of the release of Tough, the third album from American rapper Kurtis Blow, which was released on August 19th of 1982. With just five tracks clocking in at a little over twenty five minutes in total, this EP went to number 167 on the US Billboard Hot 200 and number 38 on the Billboard R&B charts.


Side one opens with "Tough" which was also released as a single; it charted at number 37 on the US Billboard R&B charts. The B-side was an instrumental version of the song which spotlights the funky bass and danceable groove of the tune. Once more, Blow makes commentary on the hard times facing Americans in inner cities at the time.

"Juice", a re-accounting of a local music festival, is next.

Side two begins with "Daydreamin'", the second single from the album. Rather than rap, Blow switches over to a singing style mostly for this one.

As its title suggests, "Boogie Blues" has a danceable hook to which you can get your groove on. This is my favorite track on this record.

"Baby You've Got to Go" closes the album with a bit of a blues/rock riff and mixes rapping on the verses with a sung short, one line, chorus.

While not on the album, I should also mention the B-side to the second single. "Christmas Rappin' Part 1" was a popular holiday hip-hop tune in the early 80‘s. If my ears don’t deceive me, it sounds like Blow sampled a bit of Chic for this one.

Tough is a mixed bag for me. A couple of the tunes work for me while others clearly do not. It was like Kurtis Blow was throwing some things out to fill in, just to see how they would fly.
Posted by Martin Maenza at 7:16 AM