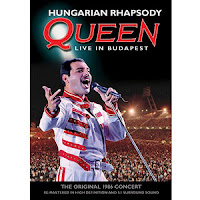 On July 27th of 1986, British rock legends Queen performed at the Népstadion in Budapest, Hungary, becoming the first western act to perform in front of a stadium crowd behind the “Iron Curtain”. János Zsombolyai, one of the country’s leading cinematographers and directors, captured that landmark event on 35mm film.


This year, Eagle Vision entertainment has released Hungarian Rhapsody: Queen Live in Budapest on a newly re-mastered DVD. The show has been painstakingly restored into high definition with 5.1 surround sound audio. The results are truly amazing.

The show itself features over twenty songs, from the group’s biggest hits (“We Will Rock You”, “We Are the Champions”, “Bohemian Rhapsody”, “Crazy Little Thing Called Love”, “Radio Ga Ga”, and “Under Pressure”) along side more recent releases at the time (“One Vision”, “Friends Will Be Friends”, and “Who Wants To Live Forever”). In total, the show encompasses nearly ninety minutes of outstanding performances.

Also included on the set is a twenty-seven minute documentary called “A Magic Year”. This features rare interviews and concert footage going from the July 13th 1985 Live Aid concert through the group’s contributions to the soundtrack of the 1986 film Highlander and into the European stadium tour that included this DVD’s main concert feature.

If you are a Queen fan like me, you will definitely enjoy this concert release. The band was at the top of their game, and Freddie Mercury works the huge crowd like a maestro. It still gives me goose bumps to hear him perform.
Posted by Martin Maenza at 1:50 PM