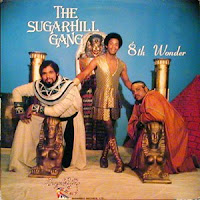 On November 24th of 1982, the American rap group the Sugarhill Gang released 8th Wonder, their second full length studio album. The album peaked at number 50 on the US Billboard Hot 200, number 44 in New Zealand, and number 15 on the US Billboard R&B charts. It also generated a pair of singles. Today, we will take a look at this record from Wonder Mike, Big Bank Hank and Master Gee as part of its thirtieth anniversary celebration.


Side one begins with the soulful guitar grooves of "Funk Box". It blends R&B harmonies with a light rap, all backed by an irresistible dance beat. The album cut is a full eight minutes in length, just like the twelve inch single that was released to clubs and radio stations.

"On the Money" keeps the funk party going with another bass-thumping tune.

"8th Wonder" was actually first released as a single in 1980. At the time, it went to number 82 on the US Billboard Hot 100, number 38 on the US Dance charts and number 15 on the US Billboard R&B charts. It uses samples of the 1978 Johnnie Taylor song "Ever Ready" and the 1979 7th Wonder song "Daily Lady", spun to a great dance beat. In turn, "8th Wonder" has been sampled over a dozen times by folks like Grandmaster Flash and the Furious Five, Public Enemy, the Beastie Boys, Fatboy Slim, and Jennifer Lopez.

Side two opens with "Apache". When released as a single in 1981, it went to number 53 on the US Billboard Hot 100, number 51 on the Dance charts and number 13 on the R&B charts. The song was first done in 1973 by the Incredible Bongo Band and has been said to include many early elements of the rap music genre. I can remember this one from parties at college; it really got crowd going as they chanted along to the lyrical hooks.

"Showdown", which charted at number 49 on the US Billboard R&B charts, features label-mates Grandmaster Flash and the Furious Five. Backed by a bouncing beat, the two crews battled with rhymes and style.

Despite its non-traditional spelling, "Giggalo” is about partying like a player and having a good time.

I was familiar with a few of the tracks from 8th Wonder back in the day, from radio and clubs. The Sugarhill Gang really did a great job blending rap and R&B into an enjoyable hip-hop sound that was good to dance to. If you are looking for some music to put you into that weekend mood, you might want to check it out.
Posted by Martin Maenza at 4:30 AM