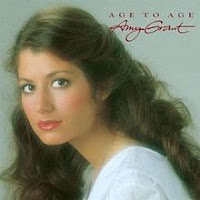 This year marks the thirtieth anniversary of Age To Age, the sixth studio album from American singer-songwriter Amy Grant. The 1982 release helped her break through in the Contemporary Christian Music community. Topping Billboard's Christian albums chart for eight-five weeks, it was certified Gold in 1983 and Platinum in 1985.

It won the Pop/Contemporary Album of the Year and Recorded Music Packaging of the Year awards at the Gospel Music Association's Dove Awards in 1983. It also won the Grammy Award for Best Gospel Performance, Contemporary in 1983. In 2001, the album was listed at number 92 on the CCM's 100 Greatest Albums in Christian Music.


Side one opens with "In a Little While", a gently rolling piano piece about getting some uplifting news on a day when everything seems to be going wrong.

"I Have Decided", a proclamation of faith, has a bit of a southern rock sound to it on the opening and chorus thanks to the guitars.

"I Love a Lonely Day" is a mid-tempo tune about using a quiet day for reflection. The saxophone solo adds a wistful touch to the music.

"Don't Run Away" incorporates some synthesizer sounds, right in line with the early 80’s music trends, before moving into a little more of a jazzy rhythm.

I honestly did not know what to expect given the next song‘s title. "Fat Baby" has an old-fashioned piano rag groove to it, complete with Andrews-sister backing vocals.

Side two starts with "Sing Your Praise to the Lord" which reached number 1 on the Christian Radio charts. Its beautiful piano intro is a variant of Johann Sebastian Bach's "Fugue No. 2 in C Minor".

"El Shaddai" also reached number 1 on the Christian Radio charts and won the Song of the Year at the GMA Dove Awards. It also earned Michael Card the Songwriter of the Year at the same award ceremony. The title is usually translated as "God Almighty" with half the lyrics of the song's chorus being in sung in Hebrew. The album also gets its title from part of the lyrics in the chorus.

The tempo slows down with the pop ballad "Raining on the Inside".

"Got To Let It Go" features a bit of a general R&B groove ala Michael McDonald. Co-writer Gary Chapman, who also sang backing vocals on the album, steps up to duet with Grant here.

"Arms of Love" closes out the record with just Grant and a sole piano, played by co-writer Michael W. Smith.

Growing up Catholic, I think I preferred going to Mass most when the folk music was added to the service in teen years (the late 70‘s and early 80‘s). Today, this would go by other names including praise band or the like. Basically, this is the incorporation of guitars, piano and other more contemporary musical elements as opposed to a more traditional organ and choir approach. As such, I was right at home listening to Age To Age. I was familiar with Amy Grant’s music from the early 90’s but not this earlier record.

What I liked most is the variety of musical styles used, keeping things fresh and entertaining. Grant’s vocals are strong, sticking to a range that she is most comfortable with very little stretching for “glory notes”. I think would have enjoyed this album even more so had her voice been more trained and polished at this point in her career.
Posted by Martin Maenza at 4:30 AM