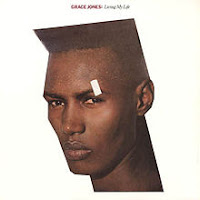 As we start the final month of the year, I will be catching up on a few of the thirtieth anniversaries of albums released in 1982 that I failed to get to previously.

On November 7, 1982, Jamaican-American singer-actress Grace Jones released Living My Life, her sixth studio album in as many years. It reached number 46 in Germany, number 18 in the Netherlands, number 15 in the UK, number 13 in Norway, number 7 in Sweden and number 3 in New Zealand. Here in the US, it stalled at number 86 on the Billboard Hot 200 while it climbed all the way to number 19 on the Billboard R&B chart.


Side one opens with “My Jamaican Guy”, the third single, went to number 56 in the UK and number 39 in the Netherlands. Done in a reggae/dub style, Jones wrote it about Tyrone Downie of Bob Marley’s band the Wailers. I am certain I had heard this one a good bit back in the early 80’s as I instantly recognized the percussion sequence with the keyboard accompaniment. It has a wonderful dance sound to it, perfect for nights at the club.

“Nipple to the Bottle” was the first single from the album. It charted at number 16 in the Netherlands, number 7 in Belgium and number 3 in New Zealand; in the US it reached number 17 on the R&B charts and number 2 on the Dance Singles chart. This one has a great, funky bass groove to it.

“The Apple Stretching”, written by Melvin Van Peebles, was written for his play Waltz of the Stork. The song paints a picture of New York City in the early morning hours. Jones’ version of it, delivered mostly in a conversational style to a reggae rhythm, charted at number 50 in the UK.

Side two begins with “Everybody Hold Still”, an up-tempo track with touches of gospel thanks to the background singers, tells the tale of someone who resorts to armed robbery to make ends meet.

“Cry Now, Laugh Later” was released as a single in the US and Canada only in early 1983.

“Inspiration” takes things down a bit with a cool, mellower number. The song moves like a wanderer of the night streets who is seeking some direction or guidance.

The album closes with “Unlimited Capacity for Love”. The track has a great synth sound, right in line with the new-wave dance tracks coming out of Europe at the time.

Grace Jones has surrounded herself with a fantastic group of R&B musicians and turned out a very funky album. I have to say that I really liked all of Living My Life upon first listen for this review. I know if I had heard it back in 1982, I would have sought it out back then too. This one falls perfectly into that R&B dance music category of the 80’s that was the soundtrack of my weekend nights. This one is quickly moving to the top of my to-download list.
Posted by Martin Maenza at 4:30 AM